Toronto wakes up to a messy morning commute

Toronto residents are waking up to a messy morning commute.

A winter weather travel advisory was issued by Environment Canada on Monday ahead of the overnight snowfall.

“Motorists are advised to allow extra time to reach their destination.” 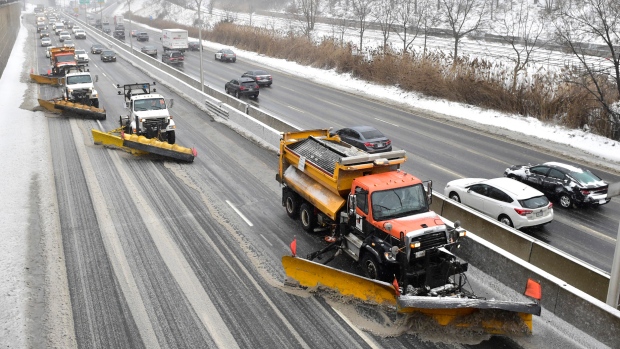 Between four and eight centimetres of snow was expected to accumulate in the city by early Tuesday morning.

The City of Toronto said salting operations on main roads began at 2 a.m. and are expected to continue throughout the day.

Salting and plowing operations on sidewalks and separated bike lanes began before 6 a.m. and will continue throughout the day as well.

While the snowfall began around midnight, the active weather is expected to change over to rain or drizzle later Tuesday morning.

The winter weather travel advisory ended just before 8 a.m. as a warm front moves in.

The temperature reached a low of -3 C overnight before it is expected to rise to an unseasonably warm 6 C Tuesday afternoon.

More active weather is expected to return Wednesday with a high of -3 C expected.