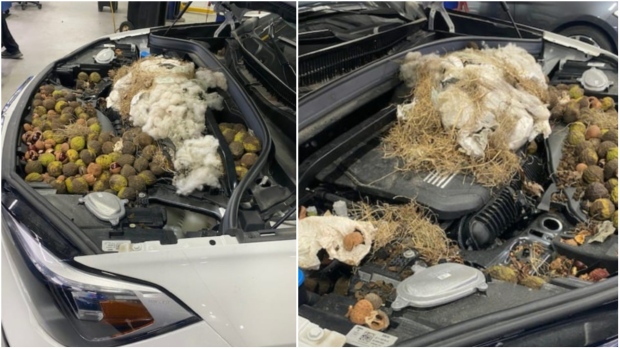 A Toronto woman said she felt shocked and sick to her stomach after learning during a routine oil change that a squirrel had been nesting under the hood of her car.

Shahana Mirza told CTV News Toronto her car was sitting idle for a few weeks near her parent's home in North York after the birth of her child. Until this week, she said she hadn't noticed anything out of the ordinary the few times she drove.

"Most recently though there was a shaking," she said. "So I called my husband on the road and I thought it was due for servicing. That sign came on that I need an oil change."

Mirza went to the dealership on Wednesday, describing the day as relatively carefree. She was looking forward to taking a tiny break from motherhood and perhaps napping in the waiting area—that is, until a service advisor approached her and said they found something unusual under the hood.

"He showed me these images, and my jaw dropped."

Hundreds of large walnuts, pebbles, and hay filled every nook and cranny around Mirza's car engine. The hood insulation, which absorbs the engine’s heat, had been completely chewed up and scrunched together to create a nest.

"Whoever opened it at first must have jumped because the sight of it was unbelievable," she said. "I've never seen anything like it."

"I don't know, for some reason it just made me feel so sick to my stomach that it was happening in my car." 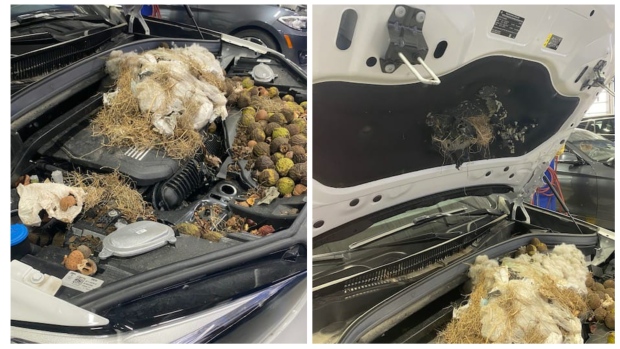 Mirza had to pay about $500 to replace the insulation and roughly $500 more for the employees to clean out her vehicle. She said the dealership manager told her squirrels can enter a vehicle from underneath, but if it is driven frequently, the rodents will scurry away. Checking under the hood regularly can also prevent nesting.

"I was busy with my baby for the first month," Mirza said. "It was a learning experience."

While the experience was shocking, the new mother said they are lucky the damage wasn't worse and that the animal hadn't cut through any wires.

"They didn't chew anything thankfully. They were just enjoying their luxury abode."