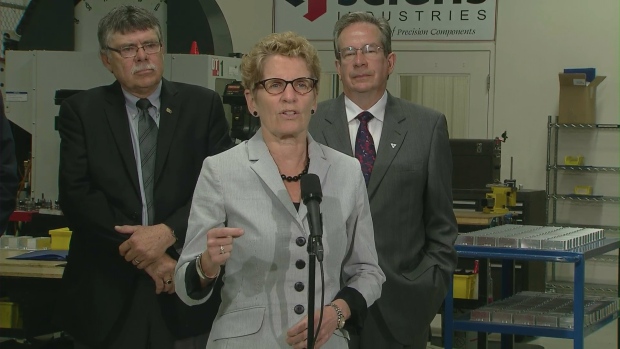 Premier Kathleen Wynne speaks to reporters at a manufacturing facility in Peterborough on Monday, June 17, 2013.

Voters need to know Wynne is directly tied to the $585-million decisions to cancel gas plants in Oakville and Mississauga to save Liberal seats in the 2011 election, said Progressive Conservative Tim Hudak.

"More spending, more giveaways to the unions, and Kathleen Wynne is an active participant in the cover up of the gas plant scandal."

The Tories plan to run the 30-second TV ads during the remainder of the Stanley Cup finals, with the theme 'Nothing Has Changed' since McGuinty turned over the keys to the premier's office to Wynne in February.

As pictures of the current and former premiers together flash by on screen, an ominous voice warns Ontario can expect "reckless overspending and higher taxes" under Wynne because nothing is going to change.

"We want to make sure that voters are crystal clear that Kathleen Wynne and the Liberals are simply more of the same," said Hudak. "The face may be different, and with a different voice, but it's the exact same old Liberal policies."

Speaking in Peterborough, Ont., Monday, Wynne made it clear she wasn't worried about the Tory ads, and said she would concentrate on her priorities such as helping Ontario manufacturers to create jobs.

"That's what I'm going to stay focused on, and the Opposition will take the tact that it chooses."

The PC ads accuse Wynne and McGuinty both of trying to low-ball the cost of cancelling the gas plants, which has ballooned to $585 million, far above the $230 million the Liberals originally claimed.

The Conservatives wouldn't say how much they're spending on the TV spots, which note Wynne co-chaired the Liberals' 2011 election campaign and claim she signed a key document authorizing the cancellation of at least one gas plant.

Wynne has until Aug. 15 to call byelections in Windsor and London to replace former cabinet ministers Dwight Duncan and Chris Bentley. The premier suggested last week that she would likely call a byelection in Ottawa to replace McGuinty at the same time, even though she could wait until December for that one.

Despite the new ad campaign, Hudak was already downplaying expectations of any Tory breakthroughs in the three Liberal ridings.

"We know this is always going to be an uphill battle because those seats have been Liberals for anywhere from 10 to 23 years," said Hudak.

"And there's no doubt the Liberals will throw everything that they have to try to win those seats. They're not above spending taxpayers' dollars for political purposes."

The Tory leader also accused Wynne of "straining the bounds of credibility" with her testimony at the justice committee hearings into the cancelled gas plants, and said he hoped McGuinty's former chief of staff, Chris Morley, would be more forthcoming when he testifies Tuesday.

"We have had a troubling case of collective amnesia from Liberal staffers, who have been far from honest with taxpayers," said Hudak.

"I think it's probably in (Morley's) interest to tell the truth and let us know where those deleted emails went to, were copies kept and who gave the orders."

The OPP were called in by the Conservatives two weeks ago after Ontario's privacy commissioner reported senior Liberal staff in McGuinty's office deleted emails on the gas plants and tried to have their email accounts permanently wiped from government databases.