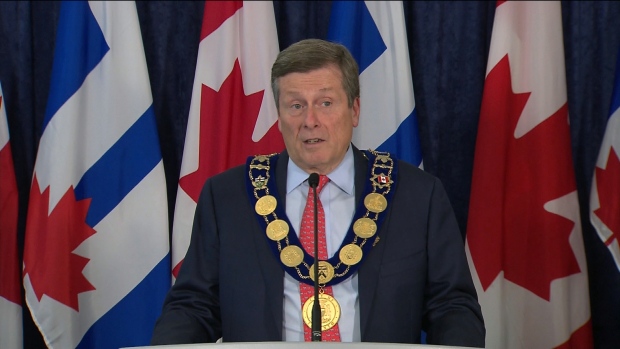 Mayor John Tory speaks with reporters while wearing his ceremonial chain of office on Tuesday afternoon.

Mayor John Tory challenged members of city council to “reject the politics of division” and to work with him in “thinking bigger” as he marked the beginning of his second term in office on Tuesday afternoon.

In front of a dramatically smaller city council that is the result of Premier Doug Ford’s abrupt decision to slash the number of municipal wards nearly in half, Tory asked his colleagues to “put aside” past battles with Queen’s Park over the size of council in favour of “showing the best of local government” and “the best of Toronto.”

“I urge my colleagues to work with me harder than ever to resist the politics of division which seem to be so prevalent in so many other places today, sometimes not too far away,” he said. “We don’t have to divide and polarize here. Our purpose is to continue to create a place where we bring people together, a place where we build a city for everyone, a city of opportunity.”

Tory said that Toronto is in the midst of a “great moment on the world stage,” and has come to be known a “cool, welcoming, respectful and caring place.”

He said that there are headwinds on the horizon, though.

Those headwinds include the recently announced closure of the GM plant in Oshawa, which Tory said is a “reminder that in a global economy dominated by rapid change, you can take nothing for granted.”

“Adaptation is required of us here at city hall just as it has been required in recent years of just about everyone else, including especially the people we serve,” he said. “I ask that we all take a good hard look at the new reality we find ourselves in and that we recommit ourselves to working together.”

Tory did not make any substantive policy announcements during his address but did say that he wants to invest in affordable housing, improved transit and safe neighbourhoods over the next four years.

He also reiterated his desire to match the $25 million in provincial funding to combat gun violence that was announced in August and said that he will follow through on a campaign promise to hire 200 additional front-line officers by the end of 2018.

“All of us went to too many vigils and memorials last year and shed far too many tears over lives cut short. That has to stop,” he said. “We need our partners at other levels of government to support us as they have significantly begun to do but we also have a duty as city leaders to do our part to tackle gun violence and the causes of gun violence.”

Tuesday marked the first meeting of this term of council and featured mostly pomp and ceremony.

On Wednesday, council will resume their meeting at 9:30 a.m.. The first order of business will be a staff report that recommends a number of changes to the community council and committee structures at city hall. The changes are necessary in wake of the reduction in the number of councillors from 44 to 25.

“I think the workability on this new arrangement is going to depend entirely on the people in the room. We are talking here about human beings. Not a machine, but human beings. And I hope that maybe as a result of the experience we have been through, maybe it will bring us together a little bit more to prove that we can actually get things done that are visible to the eye, measurable and that people can see and feel,” Tory told reporters after the meeting. “I know we can. But, it will very much depend on the people in that room, including myself.”

Tory received his chain of office on Tuesday from his special guest Marcia Brown, who is the executive director of a a youth community support organization in Rexdale known as Trust 15.