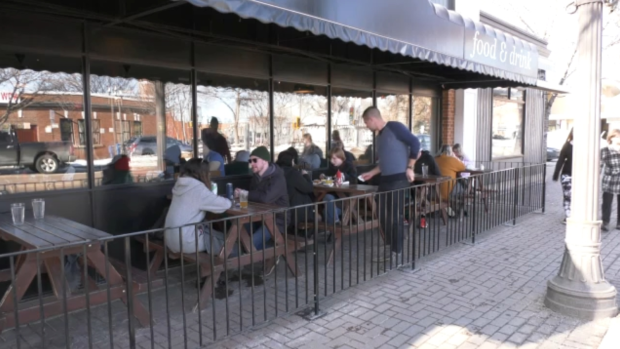 On Tuesday, the city’s planning and housing committee recommended that city council continue to allow patios in Toronto to operate on a “more liberal basis” during the winter months, Tory said, and the mayor's executive committee has also recommended additional measures to clear the way for winter patios.

"We need to give businesses the flexibility to operate where safe and possible through the winter months. While we have some limitations with respect to patios in curb lanes and ensuring we can safely clear our roads from the snow, there are opportunities that allow us to continue the success of patios through the winter in areas, such as sidewalks and private property including parking lots," Tory said in a news release issued Wednesday.

Patios in curb lanes must be dismantled before the snow begins to fall, Tory noted.

Recommendations to city council include extending the CafeTO program to allow sidewalk cafes to continue to operate until April 14, 2021 and waiving fees for those patios.

While some restaurant owners have suggested that winter patios are too costly to operate, Tory told CP24 he hopes that some will find the new rules helpful.

“(It’s) just to give restaurateurs the opportunity when they are so hard hit to offer people a place to go and it will be heated,” Tory told CP24 on Wednesday morning.

“It won't be exactly like room temperature necessarily but I think a lot of people in the right places at the right times might take advantage of it and help their restaurants and bars at the same time.”

Several restaurants around the city have already put up tents on their patios to shield people from the inclement weather.

“I'd love to see somebody try those bubbles that we see in New York and other places. The Bentway park underneath the Gardiner tried it last year... so it is anything like that,” Tory said.

“And it’s obviously subject to some safety inspections to make sure that they are safe in terms of the context of heaters and what not.”

Tory said even when indoor dining rooms reopen in the city, winter patios may still be a valuable thing for restaurants to have.

“We are just trying to make it easy for them in every respect we can to do a bit more business with the indoor dining closed for now and with some people being nervous about indoor dining even when it opens in a couple of weeks,” the mayor said.

Indoor dining rooms, fitness centres, and movie theatres were all closed for 28 days on Oct. 10 in Toronto, Ottawa, and Peel Region when the province reverted the three areas back to a modified version of Stage 2 following a surge in COVID-19 activity.

The same restrictions were extended to York Region on Oct. 19.

It is not yet clear if the province plans to lift or extend those restrictions after the 28-day period has passed.

Brampton Mayor Patrick Brown says he hopes the province will agree to reopen restaurants next month.

"I did express to the premier my concerns about restaurants being closed when we haven’t had any form of transmission in our restaurants. I spoke to him the night before the decision was announced. I hope going forward that after this 28 days, as long as the COVID cases remain stable, that they will be able to reopen," he said at a news conference on Wednesday.

"My concern is with colder weather patios outdoor dining are not as tenable as it was in the spring when this happened the first time. So we are conveying to the province these concerns. I believe mayor Crombie has as well and we will do our best in these 28 days to promote and support local takeout and outdoor dining but it is becoming a more difficult pitch with colder weather."