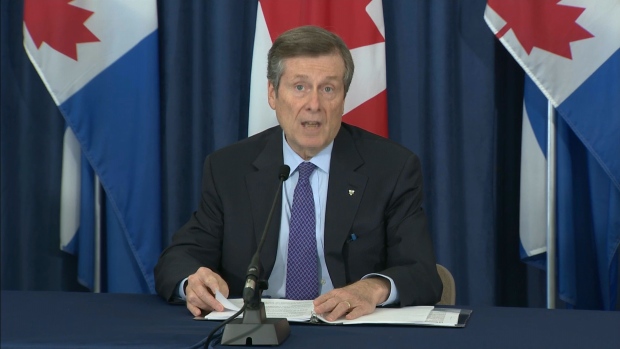 Mayor John Tory says he’s confident that the building and construction industry will address and combat anti-Black racism following a number of racist incidents at construction sites across the city this summer.

Tory met with leaders from major construction unions on Friday afternoon to discuss how to eradicate anti-Black racism within the industry.

Last week, Tory also met with senior executives of building and construction companies from across the city to discuss the matter.

So far this summer, there have been at least four separate incidents where nooses have been left hanging at construction sites in the city.

The incidents happened at Michael Garron Hospital, an Eglinton Crosstown construction site in the west end and at two condominiums downtown. All incidents have been investigated as crimes by Toronto police but no arrests have been made.

In a statement released after the meeting on Friday, Tory said both the unions and the construction companies have indicated their “strong concern arising out of the extremely troubling incidents of anti-Black racism on construction sites.”

“The leadership at the construction unions acknowledged in the meeting that the violent and hateful nature symbolized by the noose is unsettling, unacceptable and deserves a robust response from the unions and associations,” Tory said in the statement.

My statement on today's meeting with the construction unions on anti-Black racism. pic.twitter.com/XreI2m33tK

Tory said he discussed with the unions steps on how to encourage equitable and inclusive workplaces and “agreed to work together on a way forward.’’

“Following these two meetings, I am confident that the building and construction industry will lead the charge on tackling racism in all its forms, particularly anti-Black racism,’’ the statement reads. “All those in attendance conveyed their commitment to addressing this issue and ensuring similar events never occur again on any construction sites.”

In the same statement, President of the Toronto and York Region Labour Council, John Cartwright, said Toronto’s unions are committed to challenging systemic racism and “making construction workplaces safe and inclusive for everyone who helps build our city.”

Tory said the unions are expected to publicly announce an action plan on how they will combat racism within the industry, but the release date for this plan is unknown.

A noose was found at a construction site in the area of Dundas and Sumach streets.