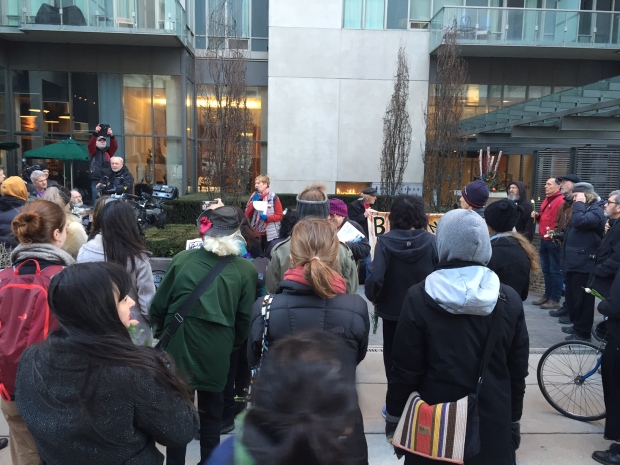 Mayor John Tory is defending the city’s efforts to protect Toronto’s most vulnerable residents after protesters stood outside his condo building on Sunday calling for more shelter beds in the city.

On Sunday night, several people gathered outside the entrance of Tory’s Yorkville condo to protest the death of a 28-year-old homeless man who died last week after he was unable to secure a bed at the St. Felix Centre, a shelter in the city’s downtown core.

A statement issued by the mayor’s office Sunday night said the man, who died following a suspected overdose, was referred to another shelter that did have space but the man declined the offer.

“It was a tragedy that anybody died for any reason. In this case I think it was as much related to some of the problems we have with drug overdose in the city as anything else,” Tory told reporters on Monday.

“This situation is not perfect. I’m not sure you are ever going to achieve perfection in terms of being able to protect everybody but we are trying very hard to do the right thing, to do our best, to apply resources in the most effective manner, to help the most people and to save lives.”

Tory said city staff will be investigating the incident at the St. Felix Centre and he will be asking for a full report once “all the facts are known.”

“I don’t have a magic wand that I can wave to resolve some of these problems that bedevil big cities but my heart is in the right place,” he added. “We are going to continue to work at what we are doing this year which is expanding the number of shelter beds available.”

But some homeless advocates say the city has not done enough to help the homeless in the Toronto.

Toronto street nurse Cathy Crowe said she is particularly displeased that the city has not agreed to open up armories to help increase the number of shelter beds in Toronto.

“Over 3,000 people signed a petition to the mayor to open the armories. Thirty-one agencies that work with homeless people did the same,” she told CP24 at the protest outside Tory’s home Sunday.

The mayor said while he does share some of the group’s concerns, he thought it would be more appropriate for them to protest outside cityhall instead.

“Really when they protest in front of my home it really is just unfair to my neighbours… I think it is just inconsiderate of them,” he said.

“I think people in public life generally should have some place they can go to have a degree of privacy with their family but again, it is a democracy. People were peaceful yesterday. They had a message they wanted to deliver. It is a message of concern that I share as the mayor.”