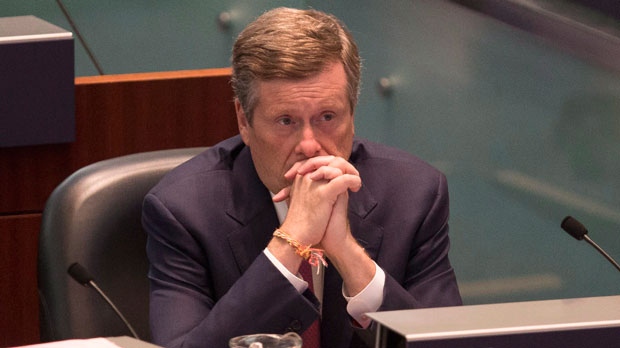 Mayor John Tory is again asking the province to make legislative changes that would allow social housing providers to permanently ban tenants who have been evicted for “serious behavioural misconduct.”

City council passed a motion in April, 2017, which asked the then Liberal government for legislative amendments that would give social housing providers the “discretion to refuse to rehouse a tenant who has already been evicted for serious criminal activity.”

The government, however, did not act on the request.

In an open letter sent to Minister of Municipal Affairs and Housing Steve Clark on Saturday, Tory argues that the legislative changes are needed “to ensure the safety of our most vulnerable residents and to ensure that they are properly served in Toronto Community Housing.”

“I believe we have a duty in government to do everything possible to stop the misconduct of a small group of people who are disrupting the lives of law-abiding Toronto Community Housing residents,” he writes. “We have the ability to send a strong message to criminals that they are not welcome in TCHC and we will not tolerate them threatening the peace and wellbeing of our communities.”

Current legislation allows tenants who are evicted from social housing units to immediately move to the top of the waiting list once they submit an application to be rehoused.

Tory said that means that tenants who are evicted for “serious behavioural misconduct, such as drug dealing or domestic violence,” are able to qualify for TCHC housing; something that he said isn’t fair.

“While Toronto Community Housing has worked hard to improve the safety of tenants since that time many tenants still do not feel safe in their homes and communities. That is unacceptable,” he said in the letter.

According to a press release from his office, Tory is renewing calls for changes to existing legislation now due to the switch in provincial governments.

Speaking with reporters at a community event in Leaside on Sunday afternoon, he said that while “tenants are entitled to due process,” they shouldn’t be able to jump the queu for affordable housing if it is proven that they have “repeatedly engaged in criminal offences.”

In an interview with CP24 Sunday, mayoral challenger Saron Gebresellassi, who herself grew up in TCH buildings, said she doesn’t think Tory’s plan would help reduce crime.

“Prohibiting anybody who may have found themselves in conflict with the justice system to have access to affordable housing doesn’t make sense to me at all,” Gebresellassi said.

“We need to have anyone who’s found themselves in conflict with the justice system able to reintegrate into society, able to find affordable housing and able to live here. So I just don’t see how John Tory could possibly think that this would possibly put young people in a positive direction.”

Tory’s main rival in the mayoral election, Jennifer Keesmaat was asked about his letter as she made a campaign announcement on Sunday but she did not directly address it, only saying that she feels as though “desperately needed” repairs to social housing units should be prioritized.