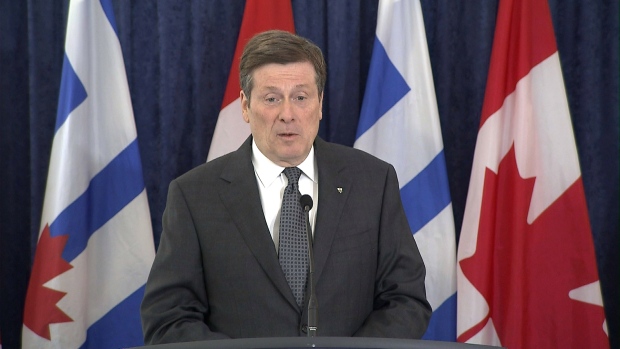 Mayor John Tory’s approval remains strong as he approaches his sixth month in power, a new poll has found.

The Forum Research telephone poll of 865 residents found that 71 per cent approve of the job that Tory has done as mayor compared to 29 per cent who disapprove.

"The Mayor’s approval continues to remain high, and the more people see of him, the less likely their approval is to fade,” Forum Research President and CEO Lorne Bozinoff said in a press release accompanying the poll.

In addition to Tory’s popularity, Forum Research also asked Torontonians whether or not they support Rob Ford’s appointment to the Hockey Hall of Fame and Museum's board of directors and found that 48 per cent disapprove of the move while 39 per cent approve and 13 per cent don’t have an opinion.

Support for Ford’s appointment to the board tended to be higher among the least wealthy (51 per cent) and Scarborough residents (45 per cent) while opposition was strongest among downtown residents (60 per cent) and those between the ages of 35 and 44 (54 per cent).

Ford was appointed to the board alongside fellow city councillors Mark Grimes and Stephen Holydaylast month.

The poll was conducted on April 7-8 and is considered accurate to within three percentage points, 19 times out of 20.