Tory says cities should 'absolutely' get a cut off marijuana tax 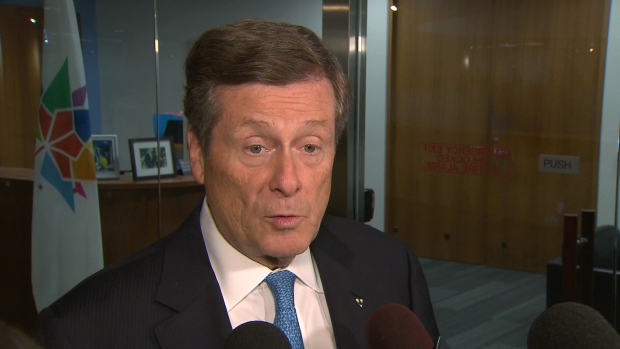 Mayor Tory says that municipalities, Toronto included, should “absolutely” receive a portion of the revenue collected through a tax on the legal sale of marijuana.

Tory made the comment to reporters on Friday afternoon in the wake of the federal government releasing its proposed tax framework for all legal sales of the drug.

The proposal calls for a $1 tax on every gram of marijuana sold, with the money being divided equally between Ottawa and the provinces. Municipalities will not receive any of the revenue under the current proposal.

“Cities, including Toronto, must absolutely get a share of that money because we are the ones who will get the call for enforcement,” Tory told reporters on Friday.

The proposed tax on marijuana, which will now be the subject of a series of public consultations, will be applied in addition to GST. As a result if marijuana is sold for $8 a gram, as indicated by the government, the total cost to consumers would be $10.04 per gram after taxes.

Tory told reporters that municipalities should receive some of the tax revenue in order to “aid in enforcement” as the legalization of the drug will likely lead to more calls to police and other agencies like Toronto Public Health.

The federal government has previously indicated that it will provide municipalities and Indigenous police services with a combined $81 million to help offset the cost of additional training needed.