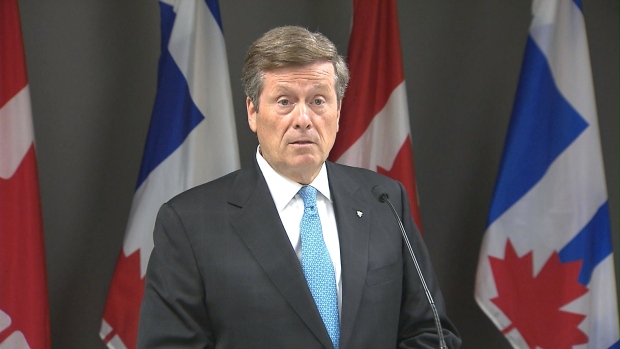 Mayor John Tory says he is “nowhere near” signing off on a bid for the 2024 Summer Olympics even as a September 15 deadline to submit an expression of interest draws near.

Tory made the comment to reporters at city hall on Thursday morning, one day after meeting with Canadian Olympic Committee President Marcel Aubut to discuss a potential bid.

Aubut has publicly championed a Toronto bid for the 2024 Olympics, previously promising to use “the whole power” of his office to bring the games to Canada’s largest city.

“I see people in the paper saying that the mayor is on the verge of holding the pen in hand and signing the letter but anyone who tells you that is making stuff up,” Tory said. “I am nowhere near that. What I have said is what I am going to do and that is to undertake a careful assessment of this issue in the time that is available to us.”

The city’s economic development committee unanimously rejected a proposal to study the possibility of bidding on the summer games in January 2014 but the success of the Pan American Games has caused many at city hall to raise the possibility of revisiting that decision.

Last month, International Olympic Committee president Thomas Bach even weighed in, telling the CBC that “Toronto could be a good candidate” for the 2024 Summer Olympics.

Speaking with reporters on Thursday, Tory said he is “mindful” of the deadline to submit an expression of interest and is currently in the process of scheduling meetings with a number of people who will be able to shed light on the city’s capacity to host an Olympic games.

Tory said he is also awaiting “facts and figures” on the success of the Pan Am and Parapan Am Games and seeking information on whether many of the venues built for those games, including the aquatics centre in Scarborough and the velodrome in Milton, could be used during a potential Olympics.

“Right now I have had varied opinions,” he said.

All that is required by the September 15 deadline is an expression of interest signed by Tory and a $150,000 deposit that would be paid for by the Canadian Olympic Committee.

Tory did not say whether he would seek the approval of council before submitting an expression of interest for the 2024 games but did say that “any decision to bid or not bid would ultimately be approved or not approved by city council.”

The mayor also stressed that his past support for Toronto Olympic bids as a private citizen won’t necessarily translate into him signing off on a bid this time around.

Toronto has bid on hosting the Olympics on five separate occasions since 1960, most recently finishing second to Beijing for the 2008 Games.

“If you look back I think I supported all of them (Olympic bids) but now that I am the mayor it is different and I have to make an initial decision on behalf of the people of Toronto,” Tory said.

The cost of hosting an Olympics is generally shared between the three levels of government and Tory told reporters that he hopes to reach out to his counterparts at Queen’s Park to gauge their support.

“They (other government) have made their own noises in terms of things they have said that are kind of quietly positive (about a Toronto Olympic bid) but there is a big difference between that and saying yes we will be there,” Tory said.

So far Budapest, Hamburg, Paris and Rome are bidding to host the 2024 games.