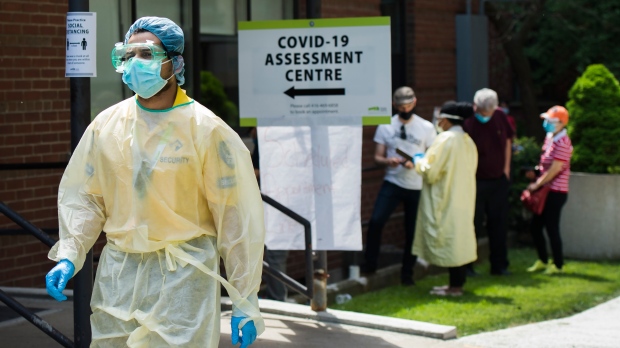 Mayor John Tory is calling on the Ford government to extend the hours at some COVID-19 assessment centres amid reports of long lineups that have left some people unable to get tested.

Tory made the comment during an unrelated news conference on Monday morning; just moments after the Ministry of Health reported its highest daily case count since early June.

His comments come in the wake of a story published in the Toronto Star over the weekend, which detailed the experiences of several people who were turned away from assessment centres due to massive lineups.

“We simply have to re-examine what we are doing here and find a way to maybe make more testing available and I think the first step might be to extend the hours,” Tory said, noting that he plans to raise the issue with Premier Doug Ford during a meeting scheduled for this afternoon.

There are currently 13 assessment centres being operated across the city but their hours of operation vary considerably.

Speaking with reporters, Tory said that he has personally heard from several people who have given up on getting a COVID-19 test after encountering massive lineups, including one person who needed a negative result to go visit a loved one in a long-term care home.

“They said they went to three different places and the lineups were so long that they just didn’t get in the lineup and thus didn’t visit their loved one. I know the premier cares deeply about that and so do I,” Tory said. “On the one hand we have a good news story because we are testing many thousands more people than we were before but on the other hand it is obviously not happening in a way that is convenient for those people who need the testing and I think we have to address that.”

Premier Doug Ford was asked about the long lineups reported at many assessments centres during his daily COVID-19 briefing on Monday. While he did not commit to extending the hours of the centres, as suggested by Tory, he did say that efforts are underway to further increase the province’s testing capacity.

The province has steadily increased its testing capacity throughout the pandemic and on Sunday turned around 29,540 specimens, resulting in 313 positive cases.