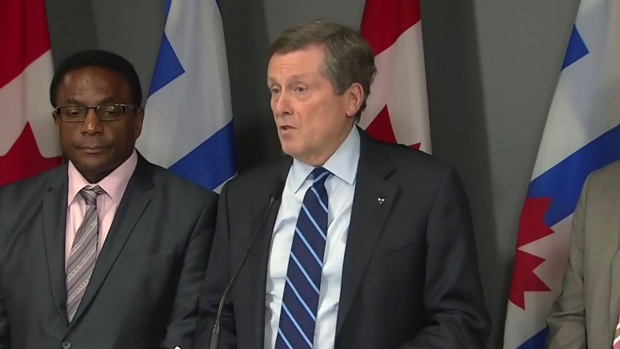 Mayor John Tory will meet with executives from several major networks and studios in Los Angeles today as part of a two-day trade mission aimed at promoting Toronto’s booming film and television industry.

A delegation that includes representatives from about 30 Toronto companies and organizations as well as councillors Michael Thompson and Paula Fletcher are participating in the trade mission.

Tory’s schedule for today will see him meet individually with officials from the Motion Picture Association, Netflix, Entertainment One, Apple and HBO before hosting a reception for about 150 industry stakeholders later tonight.

“We have to keep the film, television and digital productions coming because we are in the midst of a huge expansion of studio space prompted by the fact that we are doing so well and that we are Hollywood North. But you know the movies get finished and the TV shows sometimes get cancelled so you have to have new ones to take their place,” Tory told CP24 from California on Thursday morning.

Tory said that the trade mission is partly aimed at “saying thank you to the studios that give us so much business and create 30,000 jobs in Toronto” but will also be about going after new productions.

He said that he is particularly excited to meet with new content producers like Apple, which recently announced plans for a streaming service.

“Producers like Apple, they are people who haven’t been producing content, but we are going to see them to say Toronto should be on your list,” he said.

Toronto saw $1.96 billion of foreign and domestic investment in film, television, digital and commercial production in 2018, according to the city.