Mayor-elect John Tory has assembled a diverse group of politicians, businesspeople and non-profit executives to help him get ready to take over the city’s top job in a little more than a month’s time.

Fresh off his election victory Monday night, Tory has revealed an 8-person transition team that will help advise him on administrative and structural issues and a 19-person transition council that will provide advice on how he can push his agenda through city hall, particulalry with respect to the key files of transportation, congestion and housing.

Both groups will be chaired by former deputy mayor Case Ootes, who also chaired Rob Ford's transition team in 2010.

Though the advice that both groups provide Tory with will be strictly confidential, Ootes told CP24 that members will play a integral role in helping the mayor-elect craft an executive committee before being sworn in Dec. 1.

“We want to make sure that the committees are structured in such a way that the mayor will get his agenda through over the next year or so, so we will reach out to all sectors of the political spectrum because that is the nature of the mayor-elect,” Ootes told CP24 on Tuesday. “He wants to reach out to all people and bring them on board.”

In addition to unveiling his transition team, Tory has also announced that reporter-turned communications professional Christopher Eby will serve as his chief of staff.

Tory hopes to find roles for Ford and Chow

Earlier in the day, Tory also promised to reach out to Doug Ford, Olivia Chow and a handful of other high-profile political opponents to see if they would be interested in some sort of role with his administration.

Tory made the comment to CP24 in a one-on-one interview Tuesday morning, listing Ford, Chow, and former mayoral candidates David Soknacki and Karen Stintz as people who he would like assistance from as he gets to work on carrying out his agenda.

“We have big challenges to deal with in the city but big opportunities as well, so I will be reaching out to all of those people and saying ‘What would you like to do?’ and if it is something small or something bigger I am all ears,” he said. “We have to forget the team sweaters. Whether it is a Scarborough versus Etobicoke team sweater, a left versus right sweater or a New Democrat or a Liberal sweater I want people to work together to build up the city.”

Though Tory would like to see many of his opponents playing some role at city hall, either formally or informally, it is not immediately known how many, if any, will take him up on his offer.

Soknacki has returned to the day-to-day task of running his successful spice business while Chow has vowed to take some time for herself before deciding her next step. Ford, meanwhile, is expected to go back to running his family business fulltime, though he did tell CP24 on Tuesday afternoon that he would be “more than happy to help,” particularly with regards to the two issues closest to his heart — public transit and the Toronto Community Housing Corporation.

As for Stintz, the now former Ward 16 city councillor told CP24 on Tuesday that she is “out of politics and searching for the next chapter.”

“It is a wonderful gesture and a nice outreach, but I think John should spend his time with the councillors that have been elected because that is really how he will get his agenda implemented,” Stintz said.

Tory was elected with 40.29 per cent support Monday night, finishing about 64,000 votes ahead of Doug Ford.

Though the former telecommunications executive and provincial politician will not officially be sworn in until Dec. 1, he told CP24 that he has already begun selecting a staff and will seek input from councillors on what role they would like to serve as he begins crafting his executive committee.

As for the beginning of his tenure, Tory said one of his first priorities will be meeting with other levels of government to push them for funding for his $8-billion SmartTrack light rail transit proposal.

The mayor-elect said he will also immediately work to reduce gridlock through a number of small but important initiatives, including a crackdown on delivery trucks that park illegally during rush hour and the striking of a committee to stagger road and TTC closures so construction doesn’t cripple the city.

“It is just about having a degree of sensitivity and putting people first and that is not too hard to do,” Tory told CP24. “Just a few weeks ago when they needed to do the routine maintenance on the Gardiner they did it the same weekend they decided to close the subway. It doesn’t make sense and it just takes a simple phone call or a simple email.”

Tory will look to Rob Ford for advice

At city hall Tory will likely face a challenge from newly elected Ward 2 Etobicoke North councillor Rob Ford who is already hinting at a mayoral run to regain his seat.

Ford, of course, made a name for himself by passionately arguing for fiscal responsibility at city hall while representing the ward between 2000 and 2010 and routinely ending up on the wrong side of 43-1 votes as a result.

“I won’t always agree with some of the things that he identifies as sort of things that are excessive in government — I think some of the programs for kids for example are crucial investments in the future — but I will agree with him on other things he finds because he is pretty good at ferreting those things out,” Tory said of working with Ford Tuesday. “I’d like to take advantage of his energy and zeal and say ‘OK, let’s find things we can do better’ because I am sure there are lots.” 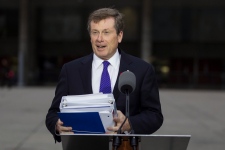