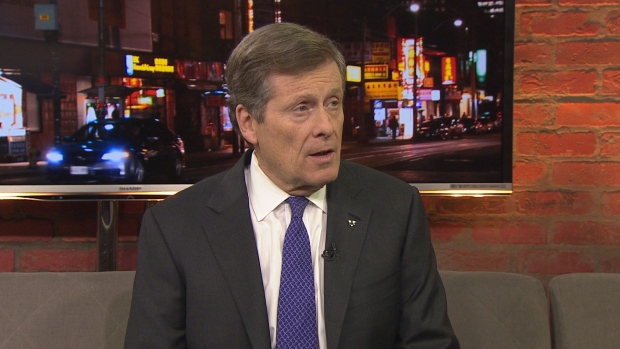 Mayor Tory is vowing to “aggressively” push for a “complete rethink of cities and their powers and responsibilities,” specifically as it pertains to taxation.

Tory made the comment on Thursday morning as he continued his push for greater revenue generating powers following a decision by the province to put the brakes on his plan to introduce road tolls on the Gardiner Expressway and Don Valley Parkway.

The move could have generated hundreds of millions of dollars in annual revenue for the city; however the province blocked it and instead announced plans to double the portion of the provincial gas tax given to municipalities.

“As the City of Toronto seeks to maintain its status as Canada’s global champion it is being held hostage by prehistoric handcuffs kept on us by other governments for reasons only known to them,” Tory said, in perhaps his strongest comments to date. “I intend to initiate a vigorous debate on a complete rethink of cities and their powers and responsibilities and how they are financed. The days of being told that we have to limit ourselves to regressive property taxes that don’t grow with the economy, those days should be over.”

The City of Toronto Act actually identifies road tolls as a potential revenue tool available to the city but it states that the municipality "does not have the power to designate, operate and maintain a highway as a toll highway," unless a regulation is made under the act.

Speaking with reporters, Tory said he intends to “directly and explicitly discuss a real change in decision making” with the province ahead of the 2018 budget process.

He said it is his hope that the end result will be “greater latitude” for the City of Toronto to make decisions and raise revenue.

“Why shouldn’t we have greater latitude with respect to how we raise money to pay for things that we recognize we have a responsibility to pay some share of? Why should it ever have been the case that if we want to put a toll on our roads that we pay for and we own, that we have to ask someone else?” Tory said. “I just think it is high time that other governments, particularly the provincial government in Ontario, have the courage to say ‘Toronto is different’ and we should have the latitude to make decisions and be held to account for them.”

The City of Toronto Act, which was brought into effect in 2006, does provide the municipality with some unique powers of taxation, including the land transfer tax and a vehicle registration tax.

The legislation, however, does not provide the city with the ability to implement other forms of taxation, such as a sales tax or income tax.

The legislation was reviewed as recently as 2015 but Tory told reporters on Thursday that he is now “rethinking” the submission the city made at the time and will push for significant changes to the act.

“Another year of tweaking and fiddling on the budget front without real help from them (the province) just won’t cut it in terms of our responsibility we have to the people of this city to build it up, to fix the housing and to fix transit,” he said.

In December, city council voted in favour of pursuing road tolls on the DVP and a tax on hotels and short term accommodations.

That said, council voted against asking the provinces for the regulatory changes necessary to implement a slew of other taxes backed by City Manager Peter Wallace, including an alcohol tax, a parking tax and even a municipal income tax.