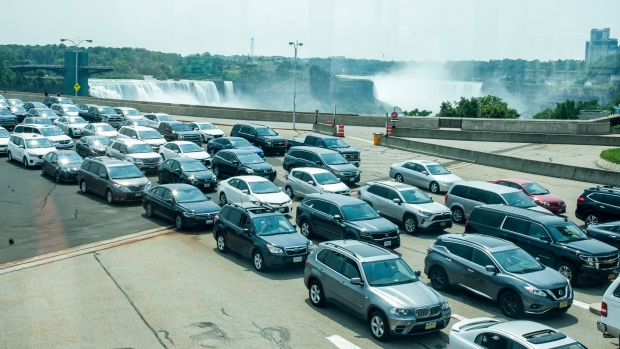 Cars wait on the Rainbow Bridge before crossing the border into Canada, in Niagara Falls, Ont. on Monday, August 9, 2021.THE CANADIAN PRESS/Eduardo Lima

Canada's tourism and hotel associations say they were caught off guard and disappointed by the U.S. government's decision to escalate its travel advisory for Canada.

The U.S. State Department urged Americans on Monday to “reconsider” travel to Canada as they set the travel advisory to Level 3, after just a three-week period where Canada was at Level 2 with the land border open to U.S citizens and permanent residents.

The Travel Industry Association of Canada says the decision will further hurt the country's battered tourism sector, especially ahead of the Labour Day weekend, the first holiday in which Americans are able to travel across the land border.

“This was not on our radar,” said Beth Potter, President and CEO of TIAC.

“It's like businesses got kicked again while they're already down.”

The Hotel Association of Canada said it's disappointed the U.S. is discouraging travel to Canada, saying hotels and the events sector will continue to feel the brunt of COVID-19's economic impact for many months to come.

“Our current data shows hotels are still operating more than 40 per cent below industry norms on average, and this will only make things worse,” said Susie Grynol, President & CEO of HAC, in a statement.

“Limited international tourism, combined with the reality that no major conventions or festivals are taking place and limited business travel, means that Canadian hotels will face another eight months like the last sixteen.”

However, Flight Centre spokeswoman Allison Wallace said the fact that the U.S. only issued a travel advisory without any increased restrictions means there won't be a large affect on travel.

She said the advisory wouldn't even have implications for travel insurance, which is already affected by COVID-19 being a known risk.

“The pent-up demand is evident both for people looking to get away and those wanting to see family/friends that live across the border,” said Wallace.

“Unless there's a restriction put in place, we expect those Americans that planned to travel to Canada in the near future will continue with their plans.”

Both Wallace and Potter say the question now is how long it will take for the U.S. to lower their advisory, and when Canadians will be allowed to travel south through the land border.

Vaccinated Americans have been allowed to cross into Canada via the land border without quarantining as of Aug. 9, although Canadians are still not able to cross the land border into the U.S.

Wallace also said the tourism industry will be watching to see if rising COVID-19 case counts will have any affect on the Canadian government's plans to reopen to vaccinated international travellers on Sept. 7.

This report by The Canadian Press was first published Aug. 31, 2021.