TPS board moves ahead with external review into missing persons reports 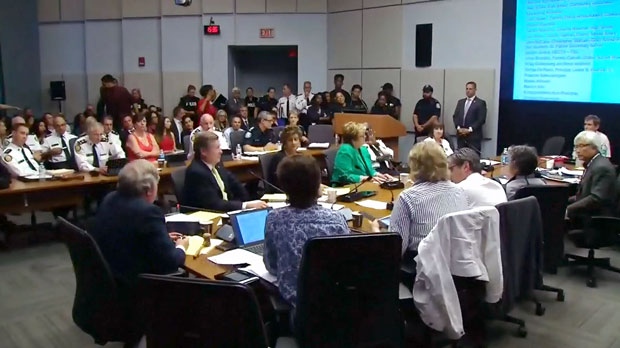 The Toronto Police Services Board has unanimously passed a motion to move forward with an external review into the way Toronto police handle missing persons reports as the fallout from the Bruce McArthur case continues.

In December, Police Chief Mark Saunders ordered an internal review amid criticism surrounding several high-profile cases, a number of which were later linked to the accused serial killer.

The review was launched prior to McArthur being arrested on Jan. 18 and remains ongoing.

In a letter to the TPS board, Mayor John Tory said that cases involving the disappearance of residents, including members of the LGBTQ community, pose “deeply troubling questions which must be fully answered.”

He said that he initially asked for the results of the internal review to be made public as soon as possible but now realizes that an “open and transparent review” is needed amid a “list of unanswered questions” that continues to grow.

McArthur is currently charged with six counts of first-degree murder in connection with the disappearances of men that date back as far as 2010.

“The safety of all Toronto residents is my primary responsibility, and I believe that building up and maintaining the trust of all of our communities is paramount to the success of the Toronto Police Service overall and the people who serve us,” Tory wrote.

In his motion, which was given the green light by the TPS board this afternoon, Tory said that a working group made up of one member of the board and three members of the public should be formed to provide advice on the “structural and process options” for an external review.

He also suggested that a facilitator be added to the group to help with public consultations.

He said that group should report back in June on the “best possible form” for such a review, including whether it should be commissioned by the board or conducted by a third party such as the Ontario Independent Police Review Director (OIPRD).

“We will be taking the time between now and June to consult the community, which I think is also very important and to try to do this in a very thoughtful way,” Tory said.

“I think this beginning, and it is just a beginning, but it is a beginning that I think is as far as we can go at this stage, but nonetheless a very important, very significant first step to look at some things that have been lingering for some considerable period time and that need addressing by an outside, independent reviewer.”

The motion also suggested that the review look into potential systemic concerns surrounding bias, as well as national and international best practices in missing persons investigations.

In a statement released following the approval of the motion, Tory said the safety of all Toronto residents is his “number one priority.”

“Maintaining the trust of all our communities is extremely important to the ongoing success of the Toronto Police Service and its officers. Today, the board and Chief Mark Saunders have both made it clear that they support an external review,” Tory’s statement read.

“This case is beyond horrific and our community deserves justice, absolute answers and closure. While I recognize all these things could take time after such a tragedy, I am dedicated to this process so that we can restore trust, confidence and begin what I’m sure will be a lengthy healing process.”

Dozens of protesters gathered at the police services board meeting this afternoon and many said that while they support an external review, they also believe that a public inquiry into the way the police handled the McArthur case specifically is necessary.

“We in the queer community have been bringing this to the police’s attention for many, many years,” Lisa Amin of Queers Crash the Beat told CP24 outside police headquarters on College Street. “We are very upset and we believe that racism and homophobia has effectively killed a number of people and had they (police) done their job correctly we wouldn’t have a serial killer in our midst, we would have had a tragic death maybe and we would have been safer in the community.”

Police Chief Mark Saunders has previously said that he would support an external review and on Thursday he penned an opinion piece in the Toronto Star in which he said that “key questions could not be credibly answered” without such a review.

Saunders added that an external review “will offer the greatest measure of public confidence."

The board also hosted a number of delegations from community members who expressed concerns about how the review will be handled.

Speaking at the meeting, Shakir Rahim, a board member for the Alliance for South Asian AIDS Prevention (ASAAP), said the organization supports the motion but added that the review must be commissioned by the board.

“We support other reviews and inquiries but they should supplement, not replace, a board commissioned process," he said.

He added that “direct community involvement” must also be a part of the entire process of establishing any review.

“The working group that this motion creates cannot be the end of the community’s role, but rather the beginning,” Rahim said.

While recognizing that the review cannot compromise the criminal proceedings involving Bruce McArthur, Rahim said ASAAP believes that a systemic review should still take into account any prior relevant missing persons investigations “within appropriate legal boundaries.”

“Our hope is at the end of this process we are closer to a reality where every member of our public truly feels that their life is treated with the same respect and care as any other because today in this city, that is not the case,” Rahim said.

Speaking outside the meeting on Thursday, Saunders said the police service will "work with whatever parameters are necessary" to help in the review.

"At the end of the day it is to enhance the public trust so the public understands why we did what we did and are there are opportunities as a result of this to improve and to be stronger in a go forward," Saunders said.