TPS bringing back dedicated traffic enforcement team due to spike in collisions, fatalities 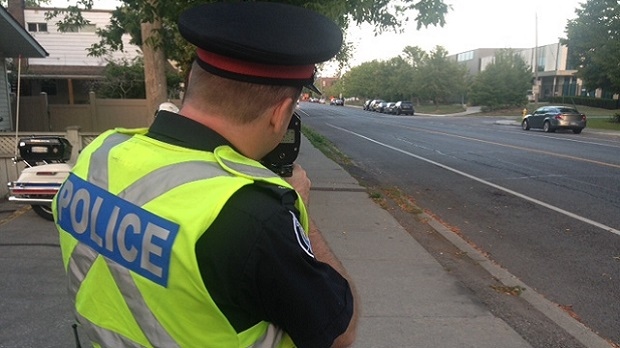 A Toronto police is shown using a radar gun in this file photo. (Cam Woolley/CP24)

The Toronto Police Service is bringing back a dedicated traffic enforcement team for the new year, saying in the roughly six years since they disbanded the unit, crashes and fatalities have grown considerably.

Facing a decrease of more than 800 officers between 2011 and 2018, Toronto police shut down their Strategic Targeted Enforcement Measures (STEM) team in 2013.

A traffic unit remained but its priorities are to patrol the Gardiner and DVP and respond to crashes and reports of impaired drivers.

In the years since, the number of provincial offences tickets issued fell by more than half while the number of collisions investigated annually rose from about 53,000 in 2012 to nearly 80,000 in 2018.

According to a report that will be considered by the Toronto Police Services Board next week, those crashes have deadly consequences.

“So far, in 2019, 48 people have lost their lives to traffic collisions, 35 (73%) of those were vulnerable road users (pedestrians, cyclists, motorcyclists).”

That is more than the number of fatalities suffered in traffic incidents throughout the entire year in 2012, the last full year where the STEM team was active.

As a result, Toronto police propose bringing back two teams of four — one sergeant and three constables —to patrol high-risk intersections and other collision-prone areas between the hours of 6 a.m. and 8 p.m. every weekday.

The overtime pay needed for the officers would be covered by about $1 million from the City of Toronto’s Vision Zero 2.0 program.

The officers will be looking for drivers who speed, disregard stop signs or traffic lights and using cell phones while driving.

Neighbourhood officers in each of Toronto’s police divisions will be asked to “supply Traffic Services with their most troubling neighbourhood traffic complaints” and the new team will go out and patrol the problem areas.