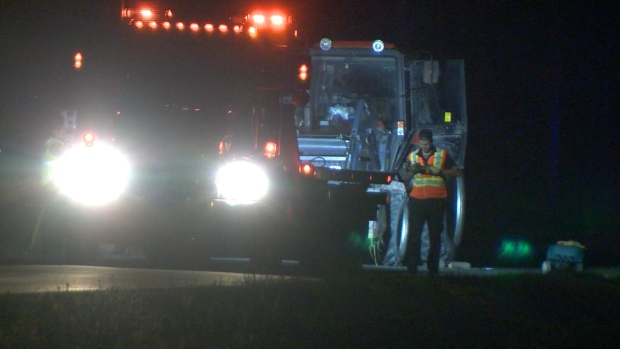 NOTRE-DAME-DE-STANBRIDGE, Que. -- A rural Quebec community is in mourning after three young children died on Canada Day after being ejected from the front loader of a tractor.

Seven other people were injured in the incident, police said, which occurred on a country road in the small town of Notre-Dame-de-Stanbridge, about 55 kilometres southeast of Montreal.

The 30-year-old driver of the tractor has been arrested and is expected to appear in court later Thursday. Police said alcohol could have been a factor.

Police said shortly before 7 p.m. Wednesday, a farm tractor was carrying 10 people inside its front loader, along with pieces of wood. Anik Lamirande, a provincial police spokeswoman, said for unknown reasons, all the occupants were suddenly thrown from the loader.

Three children aged five and under were killed. The injured include three children whose lives are not believed to be in danger, and four adults, two of whom are in critical condition. Lamirande could not say if all 10 people were related.

On Thursday morning, skid marks and faded bloodstains were visible on the pavement of Rang Sainte-Anne, the quiet rural road where the incident happened. A Quebec provincial police car was stationed in front of a grey house with a red tin roof.

Several pieces of heavy farm machinery could be seen parked next to the fields adjacent to the house. A hockey net and a children's play set sat in the backyard.

Luc Perreault, who lives nearby, said he heard police sirens racing through the village just after 7 p.m., and rushed to the end of the road to see what was happening.

While he said he didn't know the family, Perreault said he believed the event was likely a family celebration.

“A Canada Day that just turned terrible,” he said.

It's rare to see people riding in the loader of a tractor, he said, but he admitted to doing it himself when he was a child.

“We used to do that when we were kids, you know, with grandpa's old tractor sometimes, get in the bucket. But not to that magnitude, so many people.”

He said the small community of fewer than 700 people is devastated.

“Nobody is smiling this morning,” he said. “It's three kids that are gone, two adults seriously hurt.”