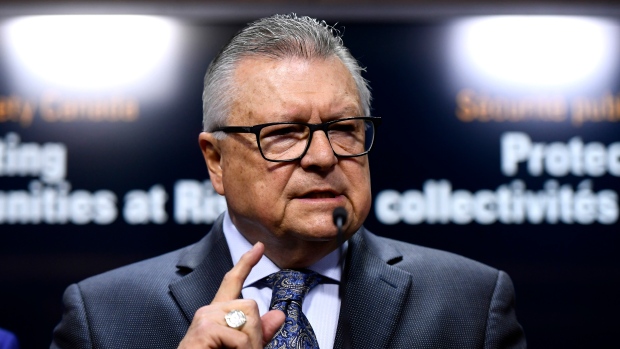 Minister of Public Safety and Emergency Preparedness Ralph Goodale speaks at press conference on Parliament Hill in Ottawa on May 16, 2019. THE CANADIAN PRESS/Justin Tang

OTTAWA - Governments must be as transparent as possible with Canadians about response measures for COVID-19, says former Liberal public safety minister Ralph Goodale.

The cascade of daily briefings from the prime minister all the way down to local health officials are essential to that process, but he said it's equally important that the government makes sure its being held accountable as it develops its response.

“It's very important for them to be there and be present and visible and accessible in order for people to have the confidence that the system and the country is working,” Goodale said in an interview.

The Liberals faced major criticism last week when their emergency aid bill for COVID-19 contained broad powers to raise and spend money without Parliament's approval for the next 21 months.

The Opposition demanded a change, and those provisions now expire at the end of September.

Goodale said he's not sure why the government would have sought such extended authority. He doesn't believe they were trying to hide anything, given that they took the unusual step of giving opposition parties the bill ahead of time.

“The dispute was unfortunate, it set back that process of working together a bit,” he said.

“When future measures are considered, the government will be very alert to the fact that measures of that kind that are open-ended or for long periods of time should be avoided.”

The opposition also won the right to have House of Commons committees oversee the government's COVID-19 efforts.

The health committee is set to convene by teleconference Tuesday, with the finance committee expected in the coming days.

That kind of parliamentary oversight is essential, Goodale said.

But he said there also needs to be oversight of other elements of the government's response, including security measures.

For example, governments need to be clear about the tools that might be deployed to ensure people are complying with mandatory isolation or provincial restrictions on gatherings of a certain size.

Some jurisdictions have said they are using cell-phone tracking; others are urging people to call local bylaw officers or police.

“The tools that they use to do that need to be tools that are fully accountable and transparent and not done in any nefarious way or in secret because the consent of Canadians is dependent on that transparency and accountability,” Goodale said.

With Prime Minister Justin Trudeau saying every option is on the table as the government considers its response, Goodale said the main pieces of legislation the government could use are the Quarantine Act, and the Emergencies Act.

The latter is a never-before-used piece of legislation that allows the federal government to override provincial powers in the event of a national emergency.

While COVID-19 and its physical and economic impact on Canada is unprecedented, Goodale said the Emergencies Act should be used with extreme caution. At the same time, he said it can't be invoked at the last minute.

“The government of Canada will want to be ahead of that curve and it will be a very serious judgement call as to when that point arrives, if it does,” he said

“But given the nature of this beast, it's one where that decision making, the weighing and calibration, will be incredibly important.”

There are other items the government must be thinking about, he said, including the safety of Canada's food supply. Efforts to make sure farmers have the financial support they require, that food inspectors can still work, and that supply lines stay open are all required.

“None of that requires special legal authority. What it requires in all of those cases is political decision-making and financial investments,” he said.

Goodale served as Trudeau's public safety minister from 2015 to 2019 and was an MP for close to 30 years before losing his Saskatchewan seat in last fall's election.

He said the country has never before seen such a crisis and admitted that security and emergency management legislation rolled out under his watch was rarely debated in the context of a pandemic response.

People were aware of the possibility, given previous outbreaks of SARS and H1N1, but he said most of the discussion revolved around responding to terrorism or natural disasters.

“A health related emergency of this order of magnitude that would actually disrupt the whole pattern of global trade and commerce and global transportation and communication and impose this kind of disruption and threat was not something that was contemplated as the first immediate example of what you're likely to be dealing with,” Goodale said.

Goodale said while he's fielded some calls from government with regards to its COVID-19 response, he's not directly involved. Instead, on Tuesday he was appointed a special adviser to the Trudeau government into Iran's downing of a commercial airliner in January.