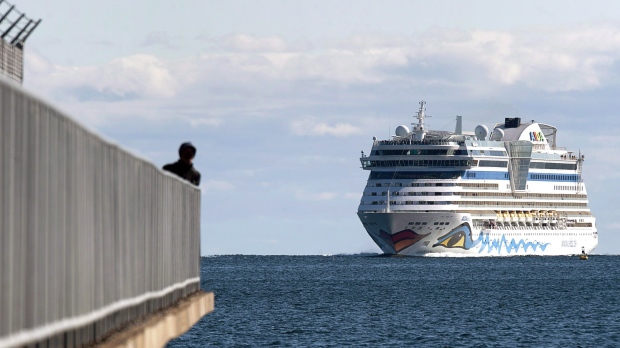 The AIDAdiva cruise ship, on a 10-day trip from New York to Montreal, arrives in Halifax on Friday, Oct. 19, 2018. Â THE CANADIAN PRESS/Andrew Vaughan

VICTORIA - The federal government says cruise ships will be allowed back in Canadian waters in November, but they must follow public health requirements.

Transport Minister Omar Alghabra said the prohibition on cruise ships because of COVID-19 will be lifted Nov. 1, eliminating a ban that was in place until the end of February 2022.

In a news release Thursday, Alghabra said the $4-billion cruise industry generates about 30,000 jobs and is an important part of the country's domestic tourism sector.

“As Canadians have done their part to reduce the spread of COVID-19, our government continues to work hard to safely restart our economy and build back better,” he said in the release.

“This is what we've been advocating for,” he said in an interview. “For government to send a positive signal that cruise would be welcome back in 2022. It's a good day.”

Victoria Mayor Lisa Helps said the cruise industry is an important part of the economy of south Vancouver Island.

“Our local economy has definitely taken a hit, but thanks to residents shopping local and supporting their friends and neighbours businesses, many businesses are still making it work,” she said in the federal government release.

British Columbia also wants the United States to lift legislation that allows ships travelling between Washington state and Alaska to sail past the province's ports without stopping.

The amendment to the Passenger Vessel Services Act was a response to Canada's ban on cruise ships through next February. Alaska Sen. Lisa Murkowski, who was behind it, has said the law would only apply until Canada lifted its restrictions.

Alaska welcomed back its first cruise ship since the 2019 season on July 9, said a news release from Murkowski, who joined state leaders and community members as the Royal Caribbean's Serenade of the Seas arrived in Ketchikan. Seventy-eight sailings are scheduled to take place in Alaska for the remainder of the 2021 season, it said.

The legislation provided a “temporary fix” under the law for cruise ships to resume sailing between Washington state and Alaska, the release said.

Canada's ban on cruise ships would not have allowed Alaska to restart its season because the law required the vessels to stop in a foreign country.

Murkowski did not immediately return a request for comment on whether the amendment will be lifted.

The B.C. Ministry of Transportation and Infrastructure said in a statement that Thursday's announcement addresses concerns from Alaska and the cruise ship industry.

Both Alaska and B.C. “mutually benefit” from the cruise ship industry, it said.

“Premier John Horgan also met with Sen. Lisa Ann Murkowski to discuss the temporary bill,” it said. “Both Alaska and B.C. want to see a resumption of cruise ship stops in B.C. once it's safe to do so.”

Robertson said Canada's announcement sends a clear signal that ships will be welcomed back.

“I'm hoping that today's announcement maybe has thrown a little bit of cold water on that (legislation) and that the state of Alaska will see that they can plan ahead to 2022 in confidence.”

Utah Sen. Mike Lee has introduced three bills to repeal and reform the 135-year-old Passenger Vessel Services Act, saying in a statement this week that it's an “outdated, protectionist law” that benefits Canada and harms American jobs.

Robertson said he is “concerned” that the legislation might become permanent.

“I think government and industry did not take the original temporary waiver seriously and look what happened, it went through and it went through quite quickly,” Robertson said.

- By Hina Alam in Vancouver