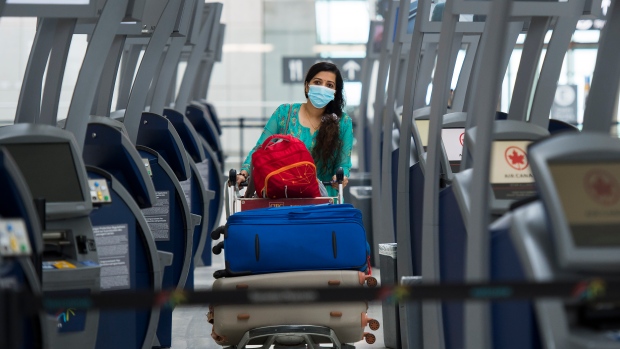 A traveller walks between check-in kiosks at Toronto's Pearson International Airport during the COVID-19 pandemic in Toronto on Tuesday, June 23, 2020. THE CANADIAN PRESS/Nathan Denette

CALGARY -- The travel industry in Canada has been thrown into a "tailspin" by new federal rules requiring a COVID-19 test before Canadians are allowed back into the country from most international travel, says the Association of Canadian Independent Travel Advisors.

The timing of Transport Minister Marc Garneau's announcement of the new protocol last Thursday -- New Year's Eve -- could not have been worse because many agents had closed their offices for the holiday long weekend, the group said in a statement.

"The releasing of this new protocol in the afternoon of New Year's Eve put most of our industry into a tailspin," ACITA said.

"With no warning in place, people who had chosen to travel over the New Year were not given the opportunity to cancel or change their trips."

ACITA is a new association started by independent travel agents last spring in part to lobby for government assistance for the industry due to challenges caused by the pandemic.

It says the testing move "seems to be having the opposite effect" from helping the industry recover.

The federal Conservatives are calling for an emergency meeting of the House of Commons to consider a study of the testing requirement, with multiple Liberal ministers asked to testify.

The change in Ottawa's policy left travel agents like Calgary's Janez Law scrambling to get in touch with clients who are on trips or planning to take trips.

"People don't like it very much but what can you do, you have no choice if you want to come home, right?" she said, adding it's difficult to provide advice to her clients because of the lack of detail in Ottawa's plan.

She said a Canadian client now in the Philippines said she will have to endure a six-hour-plus bus trip to the capital, Manila, to get the required test to ensure she is allowed back into Canada when she returns on Thursday.

Law said such tests are expensive in most of Asia, adding the test in Manila is expected to cost $150.

Her agency, Travel Far and Beyond, specializes in arranging trips to Asia but has experienced a 90 per cent decline in volume due to the pandemic.

Law added she personally supports the idea of more testing of travellers if it makes Canada safer.

The new rules will further discourage customers who are already wary of travelling to Africa during the pandemic because of its perceived quality of health care, said Pat Littlejohn, a co-owner of Toronto's Wild Journeys Safaris in Africa.

"We sell trips to Africa. It actually might be very difficult to obtain one of these tests in Africa before returning to Canada. This just might be an impossibility," she said.

"To put that requirement on just seems to just shut down travel, basically."

Quick tests for COVID-19 at the airport would be a much better way to proceed, she said, adding many of her clients have put their plans "on hold" until the pandemic situation clears up.

The ACITA statement says most travel clients are willing to accept an additional cost related to travel during the pandemic but fear they could face "being gouged" to get the required testing.

"Our clients, those who have travel booked, are now looking to cancel their trips, not only due to the uncertainty that arises should they have difficulty getting a test within the allotted 72-hour time frame, but also due to the additional costs associated," the group said in its statement.

It added that travel agents have been unable to tell passengers set to depart Canada this week whether testing locations they've identified will be included in Ottawa's list of approved facilities since that list hadn't been published.

This report by The Canadian Press was first published Jan. 5, 2021.