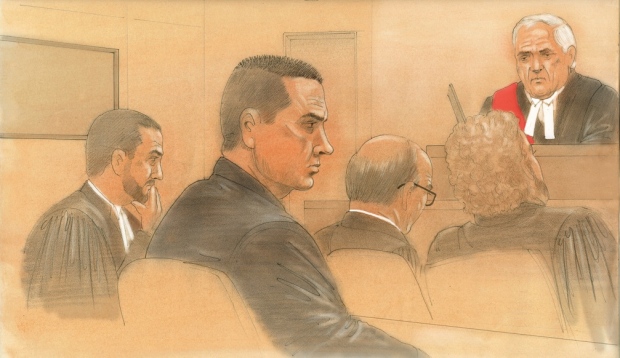 Const. James Forcillo is shown in this courtroom sketch on Sept. 14. (John Mantha)

A Toronto police officer who is charged in the fatal shooting of Sammy Yatim on a TTC streetcar two years ago appeared in court today as his highly-anticipated trial got underway.

Const. James Forcillo was among those in attendance at a University Avenue courthouse on Monday as lawyers on both sides of the case made a number of pre-trial motions.

Yatim, 18, was fatally shot on a streetcar on Dundas Street West near Bathurst Street on July 27, 2013 after allegedly brandishing a knife.

Forcillo was then arrested and charged about a month later, following weeks of escalating protests.

The shooting was captured on cellphone video. In that video, nine shots can be heard following screams at Yatim to drop his knife.

“People don’t seem to be understanding that you have to wait and hear the explanation,” Forcillo’s lawyer Peter Brauti told CTV News on Monday. “You have seen the shots take place – nobody is denying that there was nine shots – but how about giving the man a chance to explain.”

Forcillo is charged with second-degree murder and attempted murder and has been suspended with pay pending the outcome of the case.

Brauti has previously said that he believes police laid the charge of attempted murder as a “fallback position” based on the theory that his client was “justified in firing some but not all of the shots taken.”

Jury selection in the case is expected to get underway on Sept. 30.