Triple-double for James as Heat beat Raps in OT 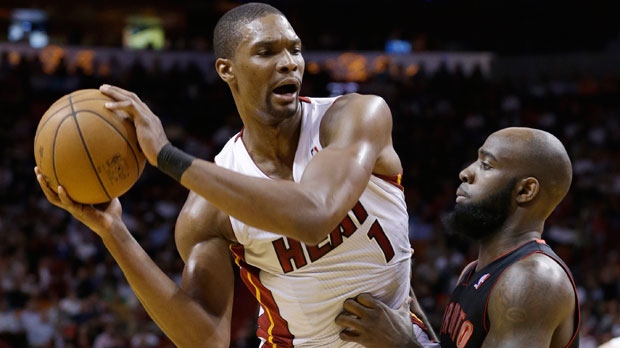 Miami Heat center Chris Bosh (1) looks for an opening past Toronto Raptors forward Quincy Acy during the first half of an NBA basketball game on Wednesday, Jan. 23, 2013, in Miami. (AP Photo/Wilfredo Lee)

MIAMI -- Dwyane Wade scored 35 points, LeBron James got his 34th career triple-double and the Miami Heat rallied from a 15-point deficit to beat the Toronto Raptors 123-116 in overtime on Wednesday.

James finished with 31 points, 11 assists and 10 rebounds for Miami, getting the last board on Toronto's final shot of the night. Wade added seven assists, including the one that set up Ray Allen for the 3-pointer that clinched the win with 59.3 seconds left in overtime.

Allen scored 18, Mario Chalmers scored 14 and Chris Bosh had a 12-point, 12-rebound night for Miami. The Heat finished overtime on a 13-2 run, erasing a four-point hole.

Wade and Allen each had six points in overtime for Miami, which outscored Toronto 14-7 in the extra session. James had five rebounds in the final 5 minutes -- after getting five in all of regulation.

The path to overtime was frantic, with neither team leading by more than three in the final 6:51 of regulation.

Calderon made a 3-pointer with 1:51 left to give Toronto a 105-103 lead; Bosh answered with a jumper to tie it. So Calderon connected on another 3, only to have that one rebutted by a 3-pointer by James, knotting the game once again.

DeRozan missed a wild layup with 19 seconds left, and James' 20-footer at the buzzer bounced off the back iron -- sending it to overtime.

Toronto led 54-39 late in the second after a 19-9 run. Kyle Lowry had seven points during the burst, Anderson added six -- and both made four-point plays during the stretch.

But Miami closed to 57-50 by intermission, after a heads-up final few seconds from Shane Battier.

He made a 3-pointer late in the half, then stole Toronto's inbounds pass to give Miami a possession that led to a free throw by Bosh. Battier then contested Lowry's layup at the buzzer, forcing a miss before the break.

Toronto led by as many as 10 in the third, before the Heat got hot. Miami scored 30 points in the final 7:55 of the quarter -- with Wade going 6 for 7 in the period, and the Heat outrebounding Toronto 13-3.

Still, it only added up to an 88-84 Heat lead entering the fourth.

Notes: James passed Tom Chambers for 37th on the league's career scoring list. ... James had 10 points in the first quarter, the fifth straight game where the NBA's reigning MVP has reached double-digits in the opening period. It's the third time he's had such a streak in his career, with a run of six consecutive games in 2010 his longest. ... Toronto had no turnovers in the game's first 22 minutes. ... One of the loudest cheers in the first half came when the halftime score of the Miami-Duke game -- the Hurricanes led 42-19 in a stunner at that point, in a game going on a few miles south in Coral Gables -- was displayed on the scoreboards. Miami went on to a 90-63 victory.