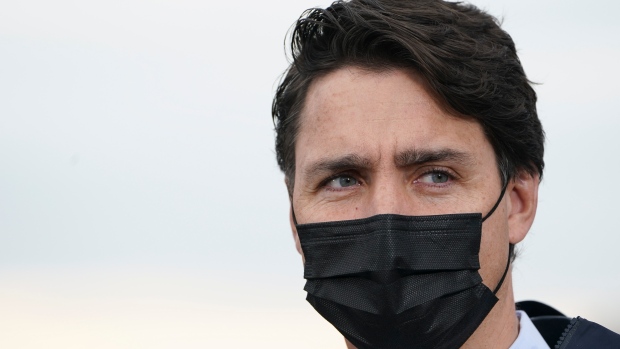 The early returns are in and so much for all that talk about a lack of interest in this pandemic election. The numbers are still being counted but Elections Canada says at least 5,780,000 voted in advance polls. That’s at least 18 per cent more than in 2019.

Turnout is always a key factor in Canadian elections and with COVID-19 social distancing rules in play, there are concerns that turnout might be low this year. The expectation is the lines will be long and the patience of voters will be tested next Monday. Getting the vote out– the politicos call it the ground game– will be critical for each party.

One way for parties to energize voters is to focus on the vision and leadership of their leader. And to take to task the leadership faults of their opponents. That was on display today.

Conservative leader Erin O’Toole again charged Justin Trudeau with calling an “expensive, unwanted and unnecessary election” in the midst of the pandemic. O’Toole then said, “That’s not leadership. It’s self-interest.” O’Toole was less than an hour south of Ottawa in the riding of Glengarry-Prescott-Russell. The Conservatives need to turn ridings like this one from red to blue on election night. Right now the polls have the Liberals with a narrow lead in Glengarry.

O’Toole accused Trudeau of dividing Canadians and fighting against the old Conservative Party. O’Toole said Trudeau is “railing against a platform and a party that no longer exists anywhere other than his imagination. It’s not 2015 Mr. Trudeau. It’s 2021. And people aren’t interested in the past.”

The Liberals had Justin Trudeau in British Columbia again this morning. Trudeau had his turn to attack O’Toole’s leadership saying the Conservative leader “is not leading he's misleading.” Trudeau laid into O’Toole’s positions on climate change, mandatory vaccines and daycare. And yes, Trudeau did remind voters of the Harper Conservatives. Trudeau said the Conservatives under Stephen Harper “didn't understand that the only way to build a strong economy with good jobs is to fight climate change at the same time.”  And Trudeau went on:“Mr. O’Toole and this newest version of the Conservative Party, they want to go exactly back to Stephen Harper's targets and Stephen Harper's approaches on the environment.”

Jagmeet Singh,the NDP leader,is also selling his vision for the country.“I’m letting Canadians know what I believe and what I’m fighting for.” Singh is sticking with pocket book issues this week, today again promising to reduce internet costs for Canadians.

Singh started his day in Toronto before boarding his campaign bus to make his way to Windsor with a stop in Kitchener. Kitchener-Centre will be a riding to watch on election night. The Liberal candidate on the ballot is Raj Saini but he withdrew after allegations of sexual misconduct.  The Green Party candidate Mike Morrice placed second in 2019 and right now this riding is a toss-up between the Greens, the NDP and the Conservatives. All three will be keen to win it.

Put that riding down as an Ontario Liberal loss.

Tonight Singh is in another Liberal riding, Windsor-Tecumseh.  The NDP lost the seat in 2019 by 632 votes and it is a rematch with NDP candidate Cheryl Hardcastle trying to win it back from the Liberal MP Irek Kusmierczyk. Right now it is another toss-up riding.

Each party will be looking for ways to drive home its leader’s “vision” for Canada’s future. But if the last couple of days are any indication,the leaders will also ratchet up their attacks on each other, challenging their leadership, their very right to run Canada for four years.