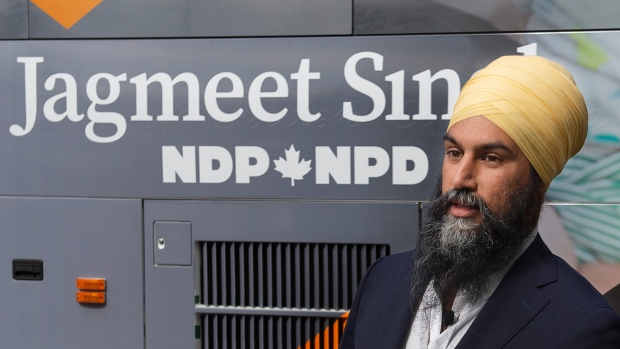 NDP Leader Jagmeet Singh talks with reporters as he arrives at a campaign event in Surrey, B.C. on Sunday, Sept. 29, 2019. THE CANADIAN PRESS/Andrew Vaughan

MONTREAL - NDP Leader Jagmeet Singh is confirming that Liberal Leader Justin Trudeau apologized to him in a call last week following the brownface scandal and promised to go beyond words to take concrete action against racism.

Following last month's revelations that the prime minister had born brownface and blackface as a younger man, few details had emerged about the call between the two leaders, which Singh had maintained should remain private and not be used for political gain.

Singh says he fully agrees that an apology is not enough, and that policy changes are necessary in order to end discrimination.

Speaking ahead of tonight's French-language debate in Montreal, Singh also addressed the issue of Quebec's controversial secularism bill, saying his presence in the province as a turbaned Sikh is itself an argument against the law.

He also says it's important not to have political interference in the existing court challenge against Bill 21.

Tonight's debate will be an important moment for Singh as he attempts to hold on to 14 seats in Quebec, which recent polls suggest are all in danger.