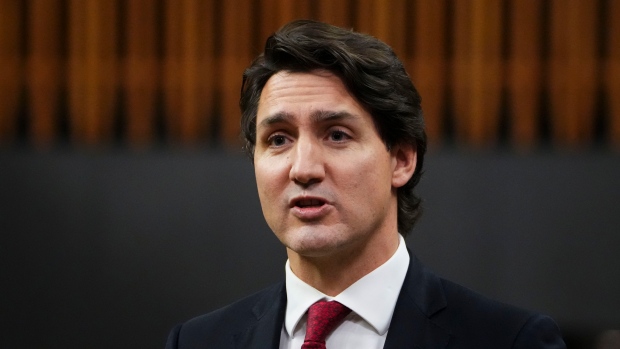 Prime Minister Justin Trudeau rises during question period in the House of Commons on Parliament Hill in Ottawa on Wednesday, Nov. 24, 2021. THE CANADIAN PRESS/Sean Kilpatrick

OTTAWA - Prime Minister Justin Trudeau has defended the government's public health response to the Omicron variant as Canadians across the country struggle with overwhelming demand for COVID-19 tests.

Despite the fact that South Africa raised the alarm about the highly transmissible variant nearly one month ago, local public health agencies have found themselves unable to provide tests for the high number of suspected COVID-19 cases in their areas.

In some places people have been told to simply assume they've been infected and self-isolate if they develop cold-like symptoms or test positive on a rapid test, essentially sending them into unofficial lockdown.

“We have all been working flat out and learning much about COVID over the past two years and indeed bracing for Omicron,” Trudeau said at a briefing Wednesday.

The government bought some time by instituting border restrictions and testing requirements to try to slow the introduction of Omicron to Canada, and has used that time to stock up on necessary supplies like vaccines and rapid tests, Trudeau said.

“Even before Omicron's arrival, we were there on stepping up to order enough boosters into 2022 for all Canadians, which is why people can be comfortable going to get that booster shot that does provide protection against Omicron as quickly as possible so that we can stay safe.”

The prime minister also pointed to the aid package put in place for workers and businesses hit by future lockdowns.

The benefits were passed by Parliament last week. On Wednesday, Trudeau announced the eligibility requirements would be loosened to provide aid to those affected by recent capacity restrictions put in place in response to rising cases of the virus.

Concerns about ease of access to and speed of delivery of PCR tests, rapid tests and COVID-19 vaccine boosters should be directed to the provinces, Trudeau said.

Health Minister Jean-Yves Duclos said resources are limited, and he is in touch with provincial and territorial leaders about lending federal help. Quebec has already requested military help to accelerate the province's mass vaccination campaign.

“I do not want in any way to minimize how hard things are right now, nor to minimize the fact that we are in for some even tougher times ahead,” said Deputy Prime Minister Chrystia Freeland.

The virtual briefing came as three members of Trudeau's staff and three members of his security detail tested positive for COVID-19. The prime minister has been advised to self-monitor and use rapid COVID-19 tests. He has so far tested negative.

“There were over 11,300 new cases yesterday alone,” Tam said Wednesday. That was up from an average of just 5,000 cases per day last week.

“Modelling shows that by the beginning of January we could have very high number of cases, which underscores the need to act urgently now to reduce the acceleration.”

Severe illness trends are also on the rise, Tam said, though it's unclear if those more serious cases are associated with the lagging effect of the Delta variant.

Still, a fast-spreading wave of Omicron could make the problem worse even if the variant turns out to be less severe, she said.

To avoid a sudden rush on the health-care system, Tam urged all Canadians to do what they can to lessen the spread of the virus. “This variant spreads extremely quickly and the situation can rapidly get out of hand anywhere.”

Several provinces have already announced strict new COVID-19 prevention measures, including closing businesses, limiting how many people can gather and even requiring out-of-province visitors to quarantine on arrival.

Quebec Premier Francois Legault announced Wednesday evening that his province had recorded about 9,000 new COVID-19 cases during the day, and he said the “exponential” rise in infections over the past week will necessitate new restrictions.

Despite projections that Omicron-driven cases and hospitalizations will increase dramatically by the end of the month without stronger interventions, Saskatchewan is not planning to tighten public health measures for the holidays.