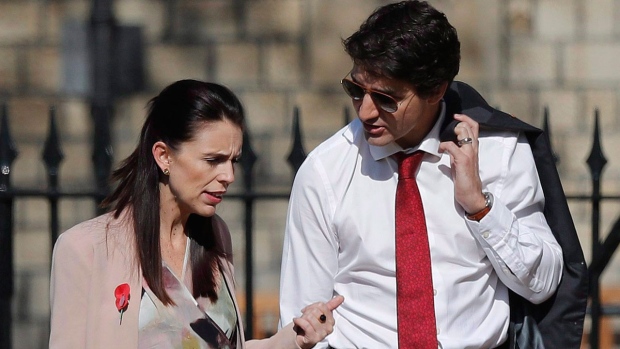 The Prime Minister of New Zealand Jacinda Ardern, left, talks to the Canadian Prime Minister Justin Trudeau as they arrive for the the second day of the Commonwealth Heads of Government 2018 for a behind closed doors meeting in Windsor, England, Friday, April 20, 2018. Trudeau spoke with his counterpart in New Zealand on Saturday, offering his condolences for the 50 people killed and dozens injured following Friday's shootings at two mosques in Christchurch. THE CANADIAN PRESS/AP/Frank Augstein

OTTAWA -- Prime Minister Justin Trudeau delivered an emotional clarion call Monday as he urged people of all political stripes to turn the page on hateful ideology and condemn the sort of intolerance that fuelled the brutal killing of 50 Muslims in New Zealand.

A visibly angry Trudeau denounced the "small, toxic segments" of society that peddle the belief diversity is a weakness, spewing hatred and inciting brutality.

"We see it here in Canada -- in online harassment, anonymous letters, defaced places of worship, acts of violence and even murder," he told the House of Commons as party leaders expressed solidarity with the victims in Christchurch and their families.

"When we fail to denounce hatred with total conviction, we empower those people and legitimize their violence."

Trudeau expressed sorrow at the many attacks in recent years that have taken the lives of defenceless people at mosques, temples, churches, synagogues, concerts, schools and malls.

"I'm sick and tired of extending our thoughts and our prayers. People around the world are exhausted by the carnage," he said.

"We have to chase out this hatred from our parties, fight it online, denounce it at town halls, push back when it reaches our front door."

Conservative Leader Andrew Scheer joined Trudeau in stressing the need to condemn all racist ideologies and doctrines of prejudice.

Canada has, from its inception, been a country built on values that transcend religious, ethnic and linguistic divides, Scheer said. "This is who we are, and this is who we will always be. Those who think otherwise have no place in our democracy."

In his maiden speech to the Commons, NDP Leader Jagmeet Singh said the use of dehumanizing language and making immigration out to be a threat can breed fear and fuel hatred.

"Let's open our hearts and replace the ignorance, the lack of knowledge with understanding, which will create the climate for compassion, so we care for one another," he said.

The massacre has sparked a global sense of concern that will prompt Canadian politicians to make some timely decisions, Goodale said Monday after appearing before a Senate committee.

Goodale said cabinet colleague Bill Blair will deliver recommendations soon, having been asked last August by Trudeau to study the possibility of a full ban on handguns and assault weapons in Canada.

A bill already before Canada's Senate would, among other things, expand the scope of background checks on those who want to acquire guns here.

The bill would also require gun retailers keep records of firearms inventory and sales, and ensure the purchaser of a hunting rifle or shotgun presents a firearms licence, while the seller would have to verify it.