SASKATOON -- Liberal Leader Justin Trudeau is promising a new deal for First Nations education that would include $2.6 billion in new funding.

Trudeau is also pledging to scrap the governing Conservatives' stalled First Nations education act and re-engage on the 2005 Kelowna Accord as part of a broad multilateral discussion with indigenous peoples on ways to improve their quality of life.

"First Nation students are falling behind in reading, writing, and numeracy, and less than half of all First Nations students on reserves graduate from high school," Trudeau told supporters at a downtown Saskatoon hotel.

Trudeau has spent the last two days campaigning in Saskatchewan, hoping to boost the party's fortunes there.

The Liberals have high hopes for the northern Saskatchewan seat of Desnethe-Missinippi-Churchill River, an area with a large aboriginal population which they last won in 2006.

Trudeau announced that a Liberal government would spend $2.6 billion over four years to improve kindergarten to Grade 12 schooling.

That would add $515 million annually in new core in the first year rising to more than $750 million by year four.

There would an immediate $500-million injection to improve school infrastructure on reserves and an extra $50 million a year to help more First Nations students gain access to post-secondary programs.

Asked how he would fund it, Trudeau wouldn't get specific.

He said his party plans to grow the economy by helping the middle class and he reiterated that the Liberals would balance the budget.

He promised to re-engage on the 2005 Kelowna Accord, a series of agreements among the previous federal Liberal government, provinces, territories and aboriginal groups that would have provided billions of dollars to improve the standard of living for First Nations peoples.

The deal was not pursued when Harper's government took power a year later.

In February 2014, federal Conservatives thought they had the support of indigenous leaders when they announced $1.9 billion for a First Nations education act. The deal eventually came apart after some indigenous leaders believed the legislation gave the federal government too much control.

Trudeau was asked about the future of that act.

"The one that people have rejected? The one that has completely failed under Mr. Harper?" he replied. "We're going to replace it with the announcement we've made today."

The Assembly of First Nations called the Liberal promises a good first step that it hopes will lead the other parties to come forward with their policies.

"This plan would have an immediate impact and help close that gap by investing in our students and our schools," said national Chief Perry Bellegarde, who is from Saskatchewan. "All the parties need to step up and make clear commitments to First Nations." 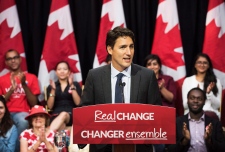