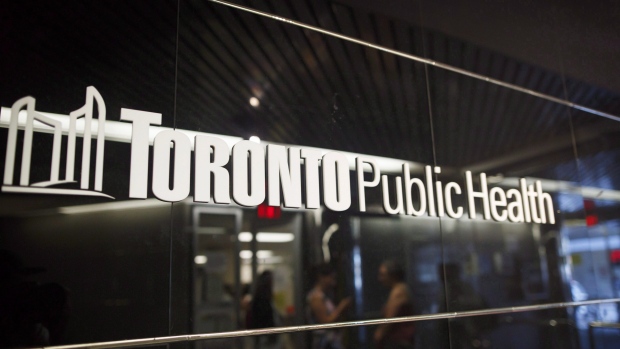 An interim injection site has opened inside Toronto Public Health's offices at Dundas and Victoria St. in Toronto on Monday, August 21, 2017. Ontario Health Minister Christine Elliott says the province will continue to fund overdose-prevention sites but will change their name and focus. THE CANADIAN PRESS/Cole Burston

OTTAWA -- Canada must ramp up its efforts to test residents for COVID-19 and trace anyone who may have come into contact with the virus, Prime Minister Justin Trudeau said Friday as he urged provinces to seek federal help with the process if needed.

The call for action came as the number of new cases continued to increase in Ontario - one of the provinces hardest-hit by the virus. Economic recovery efforts, meanwhile, forged ahead in Quebec and New Brunswick while Alberta announced regional public health restrictions would be easing imminently.

Trudeau offered few specifics when announcing measures to support national testing and contact-tracing efforts, but said such measures would be essential to control the pandemic now and in the future.

“Taking strong, collaborative action to expand testing and contact tracing is important for both Canadians and businesses to have confidence that we're on the right foot,” Trudeau said at his daily news conference. “They need to know that we have a co-ordinated approach to gradually reopen that is rooted in evidence, science and the ability to rapidly detect and control any future outbreaks.”

Trudeau said the government hopes to recommend a smartphone app next month that could play a part in the contact tracing effort, noting similar efforts in countries such as Singapore and South Korea have been successful to date.

Ottawa is helping procure swabs and other key testing materials, he said, and is also able to provide thousands of staff to help make contact-tracing calls.

Trudeau noted some of those resources are already being deployed in Ontario, where testing has re-emerged as an issue amid stubbornly static COVID-19 case data.

Ministry of Health data show the province currently has capacity to conduct 21,000 tests a day - about twice the number conducted in recent days. Ontario's growth rate of new cases, meanwhile, has hovered between 1.5 and 1.9 per cent for 12 of the last 13 days, including Friday when the number of cases climbed 1.8 per cent over the previous day.

The national picture is similar, with provinces and territories collectively testing less than half of the roughly 60,000 people the country's chief public health officer has said should be the daily target.

Ontario Premier Doug Ford said Friday that the province will concentrate on testing front-line workers over the weekend, with plans to roll out an advertising blitz in the coming weeks urging anyone showing COVID-19 symptoms to get tested.

“I drive by one of the assessment centres into work every morning and there's just no lineup,” he said. “Please, go out and get tested. It's absolutely critical.”

New Brunswick, meanwhile, moved into the next phase of its economic revival on Friday by allowing hair stylists, tattoo parlours and other “close-contact” businesses to reopen their doors.

“You can now spend time with close friends and family members who you would normally see on a regular basis,” Higgs said. “We are asking you to keep your circle of friends and family as small and reasonable as possible, especially if you have a vulnerable person in your family, or a child who attends daycare.”

Quebecers were also given permission to expand their immediate circles on Friday, with the province's top public health officials saying residents could start convening in groups of no more than 10 people from a maximum of three households.

Quebec, which has the most COVID-19 cases and deaths of any province, also plans to allow museums, libraries and drive-in movie theatres to open in a limited capacity starting next week. Deputy Premier Genevieve Gilbault also emphasized the need for ongoing testing as the province continues to fall short of its daily goal of 14,000.

In Alberta, meanwhile, Premier Jason Kenney said the hard-hit cities of Calgary and Brooks would soon be joining the rest of the province in reopening large swaths of their economies.