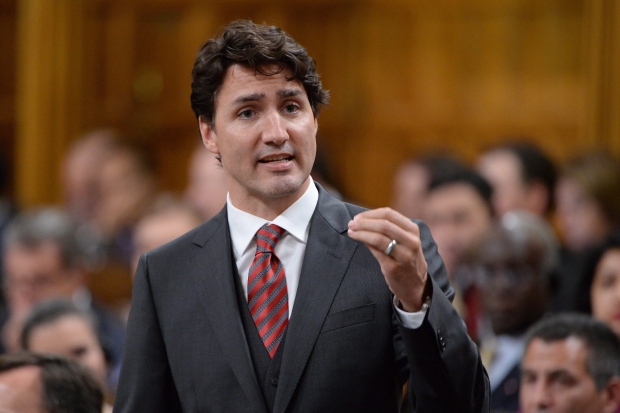 Prime Minister Justin Trudeau answers a question during Question Period in the House of Commons on Parliament Hill in Ottawa on Tuesday, May 31, 2016. THE CANADIAN PRESS/Adrian Wyld

OTTAWA -- At a currency exchange centre in downtown Ottawa, two blocks from Parliament Hill, simple signs taped to the wall mid-afternoon warned those in line that the clerks had run out of British pounds.

The U.K. currency was trading at a deep discount Friday in the wake of that country's narrow decision to opt out of the European Union -- a boon to travellers, perhaps, but evidence of much broader fear throughout Canada and around the world about the financial, economic and political fallout.

From Prime Minister Justin Trudeau to two of his most senior cabinet ministers and the governor of the Bank of Canada, the message was clear and simple: Stay calm, and carry on.

But there was no avoiding the palpable sense of panic.

Of particular significance to Canada was the potential impact on the future of the Canada-EU free trade pact the Liberals want finalized by next year. Experts in both Canada and the U.S. warned the deal was likely on life support.

Trudeau, in Quebec City to mark the province's Fete nationale holiday, did his best to soothe jangled nerves, saying Canada is well positioned to weather the global uncertainty that's sure to ensue.

"Our shared histories and common values make us natural trading partners and we will continue to work with both of them as we move forward with this new decision," he said.

In a statement of his own, Finance Minister Bill Morneau warned Canadians to expect "some market and economic volatility," but that Canada's banks were "well-funded" and "global markets are resilient and orderly."

Depending on the effects on global markets, the federal government may have to revise its economic and revenue outlook, including the always-pivotal price of oil, which was down on the Brexit news.

The ensuing uncertainty will have a short-term effect on markets that could, unchecked, cause longer-term problems, warned Kathy Brock, a professor in the school of policy studies at Queen's University in Kingston, Ont.

"We're going to have to see what the effects are because that is something that the Trudeau government will have to contend with," Brock said.

"It will be one of the more serious issues that it's facing, particularly if there is an economic downturn."

Trudeau, Morneau, Foreign Affairs Minister Stephane Dion and former Conservative prime minister Brian Mulroney had all spoken out in favour of Britain remaining in the EU prior to Thursday's referendum.

A Commons committee in February was told that federal officials believed they could have more influence in the EU if Britain remained a member, given the U.K. had a strong voice there and a sympathetic ear for Ottawa.

As for the Comprehensive Economic and Trade Agreement the Liberals had hoped to finalize next year with the EU, International Trade Minister Chrystia Freeland would only say Friday that she spoke with the EU trade commissioner and that Canada remains committed to growing global trade.

Interim Conservative leader Rona Ambrose called on the Liberals to quickly ratify the deal so "it does not become a casualty of a period of uncertainty in Europe."

Fen Hampson, a foreign policy expert at the Centre for International Governance Innovation in Waterloo, Ont., was less optimistic, given the potential cascading consequences for the EU: "I would say CETA is probably dead."

Ambrose's statement said the results showed the role a referendum can play when citizens are asked to determine critical questions about their country's future -- a subtle nod to her party's persistent push for a referendum on Canadian electoral reform.

Richard Haas, president of the American-based Council on Foreign Relations, said the results should be a warning to politicians to not underestimate populist sentiment, the degree of alienation some citizens feel from their governments and anxiety arising from lack of job security.

"What Brexit shows, to some extent, is the danger of deciding truly consequential or even historic issues through referenda," Haas said in a conference call.

Many MPs took to Twitter to express their thoughts on the vote.

Liberal MP Hedy Fry tweeted that the vote -- along with calls in other European nations like France, Italy and the Netherlands to hold their own EU exit referendums -- "signals the demise of EU & of security and stability regionally and globally."

Green party Leader Elizabeth May tweeted that she was proud of the Greens in the U.K. who campaigned for the remain side, calling the results "shattering."

NDP MP Ruth Ellen Brosseau tweeted her reaction in the form of an animation of a music video by the band Weezer along with the song's four-word title: "Say it ain't so."