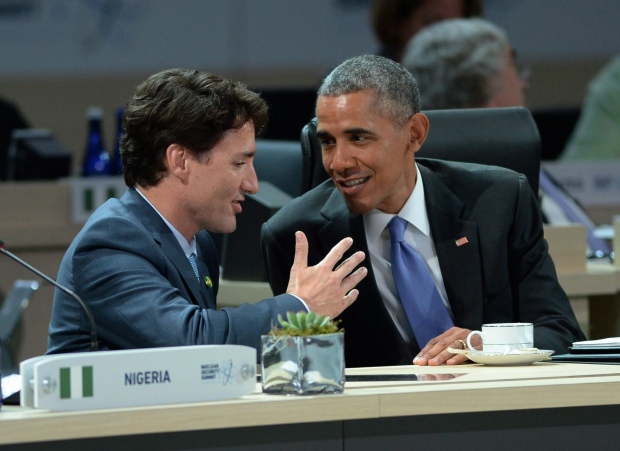 WASHINGTON -- World leaders watched a video of a hypothetical nuclear terrorist plot Friday as they closed out a two-day summit dedicated to ensuring such a calamity never comes to pass.

More than 50 countries made commitments to the nuclear-safety cause -- including Canada, which promised $42 million for global efforts to protect fissile materials.

The summit was the last of four organized during the presidency of Barack Obama. He'd made the issue a priority amid signs that al-Qaida and other terrorist groups were actively seeking nuclear weapons.

Prime Minister Justin Trudeau said it's now incumbent on the international community to make sure those efforts continue after Obama leaves office.

"Risks associated with terrorist groups getting their hands on nuclear material are not restricted to any one country," Trudeau said. "The challenge is certainly going to be in the coming years, we need to make sure we're continuing our efforts."

He announced the Canadian contribution outside the meeting hall, before he rejoined other leaders to watch the video and discuss the mock terrorism scenario.

The money will go to different places. It will help individual countries store nuclear materials, providing training and equipment in Mexico, Peru, Jordan and Colombia; will help protect sites in Ukraine, Thailand and Egypt; and will also go to international organizations that work on the issue like Interpol and the International Atomic Energy Agency.

The Obama-led summits have prompted a flurry of activity over the years. But even their organizers acknowledge they didn't complete the job. The world's largest holder of nuclear weapons, Russia, didn't even bother participating in this final meeting amid ongoing tensions with the U.S.

Obama began the meeting by repeating the same quote from Albert Einstein that he cited at the first summit in 2010: That the unleashed power of the atom has changed everything, and that a new type of thinking is essential if mankind is to survive.

He said the summits had prompted 260 commitments from countries, three-quarters of which had been achieved. More than a dozen nations have removed all their highly enriched uranium. Others have better protection and security procedures.

No terrorist group has yet succeeded at obtaining such materials. But they have tried.

Al-Qaida has actively pursued nuclear material, Obama said. There are also indications that sympathizers of the Islamic State of Iraq and the Levant have been interested in Belgium's nuclear sites: some former employees have gone to fight in Syria, and one man linked to the Nov. 13 Paris attackers had been surveilling a plant employee.

"There is no doubt that if these madmen ever got their hands on a nuclear bomb or nuclear material they most certainly would use it to kill as many innocent people as possible," Obama said.

"Just the smallest amount of plutonium -- about the size of an apple -- could kill and injure hundreds of thousands of innocent people. It would be a humanitarian, political, economic, and environmental catastrophe with global ramifications for decades.

"It would change our world. So we cannot be complacent."

He said roughly 2,000 tonnes of nuclear material remains around the world, not all of it properly secured. The U.S. would release a detailed description of its own security measures to help other countries follow suit, and would also provide a public inventory of its highly enriched uranium stockpiles, he said.

Canada has generally received high marks for its protection of nuclear materials. It finishes No. 3 safest on a list of 24 countries produced by the non-profit Nuclear Threat Initiative.

It only scores average marks, however, when it comes to how widely dispersed its materials are across multiple sites. One expert said the likeliest threat is not an actual nuclear bomb, but a so-called dirty bomb consisting of radioactive material stored in many thousands of hospitals, medical centres and universities around the world that aren't all secure.

"If a terrorist group got their hands on this material it could explode a dirty bomb in a city. That would leave a multiple-city-block area potentially uninhabitable. Imagine that happening on Wall Street... There could be devastating consequences, even without the deaths and injuries a nuclear bomb would cause."