Trudeau says time for blockades to end, Indigenous leaders to work with government

OTTAWA - After two weeks of calls for patience and stalled attempts at negotiation, a stern-faced Prime Minister Justin Trudeau emerged from high-level meetings Friday saying barricades on rail lines and other major transportation routes must come down.

“We are waiting for Indigenous leadership to show that it understands,” he said in an Ottawa news conference Friday. “The onus is on them.”

Injunctions to clear tracks must be obeyed and the law must be upheld, he said, adding that it is pointless to continue making overtures to Indigenous leaders if they aren't accepted.

“Let us be clear: all Canadians are paying the price. Some people can't get to work, others have lost their jobs,” Trudeau said. “Essential goods â€¦ cannot get where they need to go.”

The situation “is unacceptable and untenable,” he said. 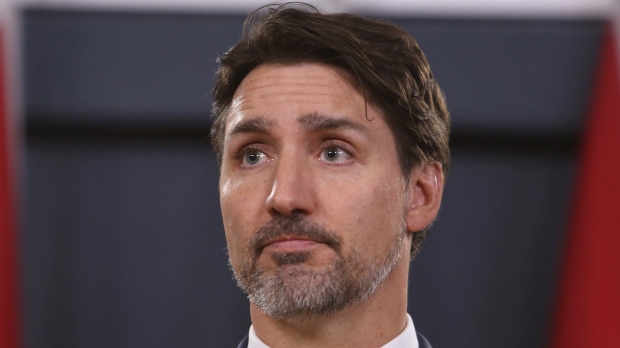 The blockades, particularly one on a critical east-west rail line in Ontario, are responses by Indigenous people and supporters to a move by the RCMP to clear protesters who had been blocking access to a worksite for a major natural-gas pipeline project in British Columbia. Hereditary chiefs of the Wet'suwet'en Nation oppose the work on their traditional territory, despite support from elected band councils along the pipeline route.

On Thursday, the RCMP in B.C. sent a letter to the traditional Wet'suwet'en leaders, telling them the force intends to move its officers off the access road and station them instead in the nearby town of Houston.

In response, one of the traditional chiefs of the Wet'suwet'en Nation said Friday his people are willing to engage in nation-to-nation talks with the B.C. and federal governments, but not until the RCMP in B.C. have left traditional Wet'suwet'en territory entirely and Coastal GasLink, the pipeline company, ceases work in the area.

Hereditary Chief Woos, also known as Frank Alec, said the B.C. RCMP have not yet left the Wet'suwet'en territory and charged they have also “increased harassment, made illegal arrests, increased surveillance and monitoring of Wet'suwet'en people and their invited guests.”

“This is completely unacceptable and far from a show of good faith and contradicts the announcement of the RCMP,” Woos said.

Until their demands are met, the barricade in Ontario erected by the Mohawks at Tyendinaga will not come down, said Kanenhariyo, who also goes by Seth LaFort, of the Mohawks of Tyendinaga.

The Wet'suwet'en hereditary chiefs were visiting their supporters at Tyendinaga to thank them and held a news conference afterward.

Woos took issue with Trudeau's comments that the blockades are causing trouble for Canadians, suggesting the Wet'suwet'en are facing injustice.

“There is a difference between inconvenience and injustice - total difference. Don't confuse one with the other,” Woos said. 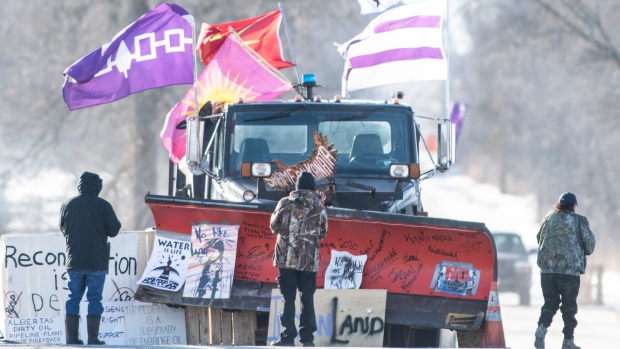 Meanwhile, the prime minister is contending with pressure from several premiers to take more swift and decisive action to end the blockades.

“We've sent a message clearly with our willingness to say, quite publicly, that we don't believe it's in the best interests of protesters or the general public to stand back in respect of the laws being broken, that it can endanger people's lives and endanger their well-being,” Manitoba's Brian Pallister said Friday.

Quebec Premier Francois Legault made it clear Thursday provincial police in his province would dismantle a blockade in a suburb south of Montreal as soon as an injunction was granted.

Canadian National Railway received a court injunction to end the blockade in St-Lambert Thursday. By late Friday afternoon, police had issued several warnings to the protesters but had not moved in.

Alberta's Jason Kenney, a former federal Conservative cabinet minister, pulled no punches in a Friday press conference. He said he made it clear to the prime minister on a conference call with the other premiers Thursday evening that the blockades are having devastating impacts on people across the country.

He said it is scaring away investment and giving the impression that Canada can't operate as a modern democratic country.

This is just the latest in an increasing pile-on of federal, provincial and business leaders pressing Trudeau and the federal government to end the blockades. “For days, he's been basically telling these illegal protesters that he's taking the use of police forces off the table. He's basically been giving them a signal that they can act with impunity. He's also talked about offering concessions to people who are breaking the law,” Scheer said.

“This is a very dangerous precedent to set. And as we face developments in the future, as it relates to other energy projects, these protesters will continue to be emboldened as they pursue their anti-free market, anti-energy development agenda.”

Despite his firmer tone Friday, Trudeau stressed that his government remains committed to dialogue and reconciliation with the Wet'suwet'en hereditary leadership, but the ball is now in their court to make that happen.

“Our government has kept engaged at all levels, we repeated our calls for collaboration, we showed respect,” Trudeau said.

“But Canadians who are feeling the very real impacts of these blockades are running out of patience.”

He also made a point to draw a line between the Wet'suwet'en protesters and their allies - those upset at the long history of abuse perpetrated against Indigenous peoples in Canada - and others who “use or engage with Indigenous protests to call out a particular project with which they disagree.”

While these “other” protesters may be advancing a view that is deeply felt, their concerns are “not anchored in the deep wrongs that have been done in ignoring and marginalizing Indigenous leadership and Indigenous voices in this country,” Trudeau said.

B.C.'s John Horgan struck a more understanding note than some of the other premiers Friday. He said his government continues to be ready to engage in talks with Wet'suwet'en hereditary chiefs.

But Horgan said more people from the community, other than the hereditary chiefs, have begun to speak out, including the matriarchs who have historically been the keepers of the traditional practices of the Wet'suwet'en people.

Horgan said he expects Na'moks, a hereditary chief who also goes by John Ridsdale, will be hearing from people in the community about his refusal to meet with the province, because that's “not how you have respectful dialogue with your neighbours.”

He said he believes the vast majority of northern B.C. residents and Wet'suwet'en people want to find a way forward and his government remains “at the ready” to help reach that outcome.

-With files from Steve Lambert in Winnipeg, Liam Casey in Tyendinaga Mohawk Territory, Bill Graveland in Calgary and Laura Kane in Vancouver