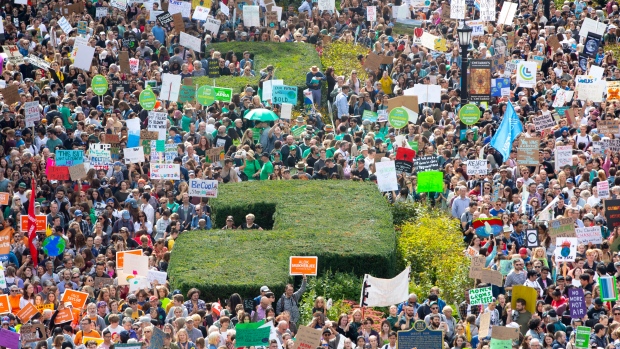 Both major-party leaders were making political calculations on a day when the federal election campaign was dwarfed by the spectacle of hundreds of thousands of young people across Canada joining millions across the world for a mass protest against political inaction on fighting climate change.

They were rallying behind Thunberg, the 16-year-old Swede who has galvanized the world's young people. She has demonstrated confidence in speaking truth to power with her defiant condemnation of world leaders at the United Nations this past week.

And she commanded rock-star attention before hundreds of thousands of people crammed into Montreal streets, declaring to cheers that fighting the “emergency” of climate change “is beyond party politics.”

The federal election campaign was all about that on Friday.

The day began with Trudeau meeting Thunberg in a Montreal hotel. He took part in his capacity as prime minister, but the encounter carried political risk for Trudeau the candidate, who has branded himself as the country's best bet to fight climate change - and Scheer the worst.

Thunberg gave Trudeau the same message she given other political leaders.

“He's, of course, obviously not doing enough,” Thunberg said. “This is such a huge problem; this is a system that is wrong. So my message to all the politicians is the same: to just listen to the science and act on the science.”

It could have been worse. In June, after Trudeau approved the $4.5-billion Trans Mountain oil pipeline project, Thunberg said on Twitter: “This is shameful. But of course this is not only in Canada, we can unfortunately see the same pattern everywhere.”

Trudeau told reporters that he agreed with her Friday assessment, and praised her for inspiring young people.

“I agree with her entirely. We need to do more,” said Trudeau.

“And that's why the ambitious plans we've laid out all week that have been criticized by some as too ambitious, are not too ambitious - are necessary.”

Trudeau also said he will release a fully costed platform that includes assessments of Liberal promises by the parliamentary budget officer before the first televised leaders' debate on Wednesday.

Trudeau has aligned himself with Thunberg on the campaign trail, praising the activism of young people in general. He has made a series of announcements this week aimed at reducing greenhouse-gas emissions, protecting oceans and habitat and encouraging conservation while simultaneously branding Scheer as a climate-change laggard.

“Andrew Scheer is choosing to hide today instead of participating in climate marches,” Trudeau said Friday.

Scheer literally flew above the fray of the day's events, travelling by plane from Montreal to British Columbia for an infrastructure announcement for new roads and transit systems that he said would cut commute times.

By extension, Scheer said, that would reduce greenhouse gases because people would spend less time in their cars, idling in traffic jams.

Scheer defended his decision not to take part in Vancouver-area climate marches, and said other Conservative candidates were participating.

“I believe it's very important not to leave children an economic deficit, a fiscal deficit nor an environmental deficit,” he said.

Scheer was spending the day in the suburbs of the Lower Mainland, including campaign stops with candidates in Maple Ridge and Richmond.

At a campaign stop in Ladysmith on Vancouver Island, Singh said Trudeau can't be trusted on climate promises after his pipeline purchase.

“It's obviously Greta's choice who she wants to meet with, but it's really clear that Mr. Trudeau promised really clearly in 2015 that he would not build the Trans Mountain, that he would oppose it,” Singh said during an announcement on coastal protection.

“That is something that should give everyone pause.”

Singh is focusing on securing NDP seats in B.C. from the surging Greens. Green Leader Elizabeth May was across the country Friday, taking part in the Montreal marches.

“Greta Thunberg has warned us that our house is on fire,” May said in a statement. “This extraordinary young woman has called on the adults to do our job and keep the children safe. If we don't feel this in our hearts then we are not listening to what the children are saying.”

NDP Leader Jagmeet Singh waves as he arrives to make a campaign stop in Ladysmith, B.C. on Friday, Sept. 27, 2019. THE CANADIAN PRESS/Andrew Vaughan