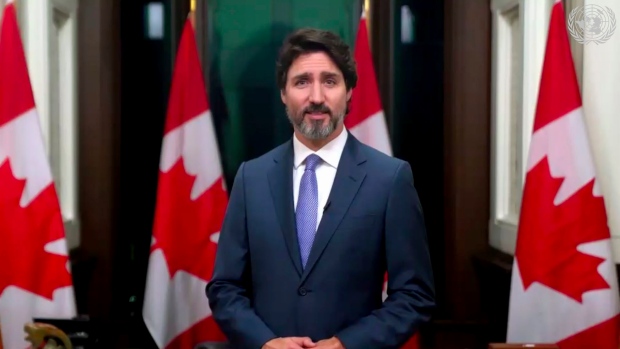 In this image made from UNTV video, Justin Trudeau, Prime Minister of Canada, speaks in a pre-recorded message which was played during the U.N. General Assembly's special session to discuss the response to COVID-19 and the best path to recovery from the pandemic, Thursday, Dec. 3, 2020, at UN headquarters in New York. (UNTV via AP)

Trudeau said Thursday the wide inequality between rich and poor countries, which has been made worse by the pandemic, also needs to be dealt with in a co-ordinated way if the world is to rebound from the economic shock of the current health emergency.

Poor countries haven't been able to increase spending the way developed countries have to blunt the economic hardship the pandemic has caused their citizens, he said.

Trudeau was reflecting the broader theme of the two-day special session of the UN General Assembly, which comes as the race to develop a pandemic-ending vaccine is heating up. The meeting is preoccupied with fixing the widespread economic damage caused by COVID-19. Louise Blais, Canada's deputy UN ambassador, and her Azerbaijani counterpart organized the special session of the full UN, its 31st in 75 years and months in the planning.

“Of course, our collaboration can't end at distributing a vaccine. The pandemic has taught us difficult lessons about inequality, both at home and between countries,” the prime minister said Thursday in a recorded video address to more than 100 world leaders and officials.

Advanced economies have spent more than 20 per cent of their GDP to support their citizens during the pandemic and developing economies spent eight per cent. “While for the poorest economies, that number was just two per cent,” Trudeau said.

UN Secretary-General Antonio Guterres praised the speed with which scientists and researchers have produced vaccine options to help cure COVID-19.

“But let's not fool ourselves. A vaccine cannot undo damage that will stretch across years, even decades to come,” Guterres said.

“Extreme poverty is rising, the threat of famine looms. We face the biggest global recession in eight decades. And these intergenerational impacts are not due to COVID-19 alone. They are the result of long- term fragilities, inequalities and injustices that have been exposed by the pandemic,” he added.

“We stand ready to work with our partners, and to help countries deal with unsustainable debt, recover and rebuild from this global crisis. We cannot let the most vulnerable be left behind,” the prime minister said.

A senior Canadian official at the UN, who requested anonymity because they did not have permission to speak publicly, said that the economic crisis exacerbated by the pandemic is potentially more damaging than the health crisis the world is currently preoccupied with.

The official said Canada would be leading discussions on Friday with international financial institutions, such as the World Bank and International Monetary Fund, on how to prevent countries from defaulting.

The official pointed out the crisis in Canada's own backyard with Caribbean countries teetering on economic ruin because their economies are so reliant on tourism that has now been shut down.

Guterres singled out the UN initiative between him, Trudeau and Jamaican Prime Minister Andrew Holness known as the “High-Level Event on Financing for Development in the Era of COVID-19” as an important tool for “putting us back on course.”

Trudeau noted Canada's contributions to the international efforts to distribute vaccines to poorer parts of the world, reiterating one of his core messages that for COVID-19 to be completely controlled, it must be defeated everywhere.