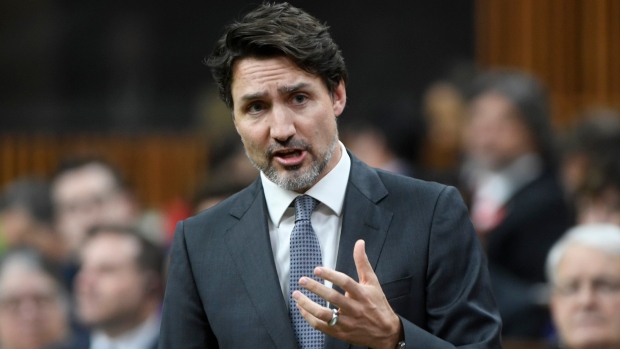 Prime Minister Justin Trudeau responds to a question during Question Period in the House of Commons Tuesday March 10, 2020 in Ottawa. THE CANADIAN PRESS/Adrian Wyld

Prime Minister Justin Trudeau plans to announce federal funding to help provincial health-care systems cope with the increasing numbers of Canadians infected with the new coronavirus and to help workers who are forced to isolate themselves.

The immediate objective is to try to contain the spread of the virus as much as possible, while also helping individuals hurt financially by COVID-19, such as by being forced to take time off work while under mandatory quarantine or self-imposed isolation.

Business and labour groups alike have called specifically for the federal government to loosen restrictions on employment insurance payments for people who are off work due to illness. This would also make it easier for people with more precarious jobs to stay home and avoid infecting others.

Finance Minister Bill Morneau said Monday that the government was “looking at taking some initiatives this week” to help workers, employers and provincial health systems.

There are few confirmed instances of community transmission of the virus that causes COVID-19 in Canada, but the number of cases continued to grow Tuesday. The illness has afflicted more than 100,000 people in 100 countries around the world.

The number includes a second and third community case, meaning the person has had no known contact with any other cases and has not travelled recently.

Provincial health officer Dr. Bonnie Henry said two of the new cases are health-care workers at the same long-term care facility where a small outbreak has already been identified.

A total of eight cases are now linked to the Lynn Valley Care Centre in North Vancouver, including two family members or close contacts of a health-care worker.

Henry said the initial health-care worker who tested positive at the seniors facility has been admitted to hospital for monitoring, adding that no more residents of the facility tested positive on Tuesday.

In Alberta, the number of cases doubled to 14. Alberta's chief medical officer, Dr. Deena Hinshaw, said the new cases involve four people from the Calgary region and three from the Edmonton area. All the cases are travel-related.

She said the patients visited a number of countries, including France, the Netherlands, Germany, the Philippines and the United States. Two patients were also on the MS Braemar of Fred Olsen Cruise Lines in the Caribbean.

In Atlantic Canada, New Brunswick's education minister ordered all preschoolers and students returning from travel abroad to stay out of school for two weeks. School trips are also cancelled for the rest of the year.

Dominic Cardy sent a letter to parents Monday that said the precautionary measure - among the most aggressive taken by any province - also applies to school and early learning centre staff, volunteers and students' family members.

In Montreal, Sainte-Justine hospital asked its staff to avoid all personal travel unless absolutely necessary - a move the Quebec government is considering extending to the entire heath network.

Quebec's Health Minister Danielle McCann said that in addition to limiting the spread of the virus, hospitals need to minimize the number of workers in isolation or off sick during a possible outbreak.

“We have to preserve our workforce because we'll need it more and more,” she said.

The hospital also asked staff to stay home from work for two weeks if they've visited certain regions, including China, Hong Kong, South Korea, Iran, India, Egypt, Japan and parts of Italy and France as well as the Seattle area.

Canadians from the Grand Princess cruise ship docked off the coast of northern California were taken by government plane to the Trenton base early Tuesday, although not all of the 237 Canadians from the ship were on board.

Foreign Affairs Minister Francois-Philippe Champagne said a “handful” of crew members tested positive for the virus that causes the illness COVID-19, although he declined to give specific numbers.

“We have ... a very limited number of crew members, which tested positive which are Canadian on the ship, and they will remain on the ship,” Champagne said in Ottawa outside a cabinet meeting.

Some other Canadians remained in California for health reasons unrelated to the virus, he said.

“We appreciate all the help we've had in that, and that's working out very well.”

Trudeau took to Twitter to thank the Canadian consular staff and American officials who helped the travellers to return to Canada.

There were 3,500 passengers and crew aboard the Grand Princess. It docked Monday at the Port of Oakland after days of forced idleness off the coast amid evidence it was the breeding ground for more than 20 COVID-19 cases.

Canada's top doctor has urged Canadians to avoid all cruise travel, because confined quarters and frequent interactions can foster the spread of the illness.

Air Canada announced it was suspending flights to and from Italy as a result of Italian regulations and “ongoing health and safety concerns” related to the outbreak.

The airline's last flight to Rome was to take off from Toronto on Tuesday, with the final return flight departing Rome for Montreal on Wednesday.

Air Canada said affected customers would be notified and offered full refunds. It hopes to restart service May 1.

Deputy Prime Minister Chrystia Freeland has written the provinces and territories asking them to inform the federal government of their state of readiness and any shortages they're facing.

The first ministers meeting of Trudeau and provincial and territorial leaders on Friday is to include discussions on the potential impact of the spreading virus on the country's health-care system and its economy.

Canada had at least 93 cases of the respiratory illness as of Tuesday afternoon: 39 in British Columbia, 36 in Ontario, 14 in Alberta and four in Quebec.

Canada reported its first death from COVID-19 on Monday. A man in his 80s died at the North Vancouver long-term care centre.

This report by The Canadian Press was first published March 10, 2020

Deputy Prime Minister and Minister of Intergovernmental Affairs Chrystia Freeland responds to a question during Question Period in the House of Commons Monday December 9, 2019 in Ottawa. THE CANADIAN PRESS/Adrian Wyld