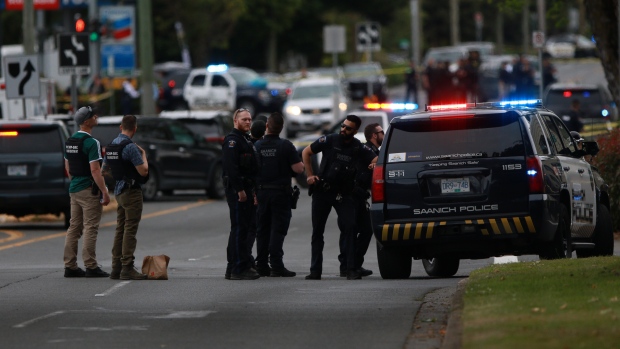 Saanich Police joined by Victoria Police and RCMP respond to reports of gunfire involving multiple people and injuries reported during an active situation in Saanich, B.C., on Tuesday, June 28, 2022 THE CANADIAN PRESS/Chad Hipolito

Questions of what would motivate twin brothers to enter a British Columbia bank dressed in body armour and prepared for a gun battle remain unanswered, but a criminologist sees similarities to two other young men who terrified Canadians in 2019.

Prof. Robert Gordon from Simon Fraser University's school of criminology said there are parallels with the Saanich bank shootout last week and the murders of three people in B.C. and the subsequent suicides of their killers.

A manhunt for Bryer Schmegelsky, 18, and Kam McLeod, 19, lasted nearly a month in the summer of 2019 before they were found dead in northern Manitoba.

Twenty-two-year-old Mathew and Isaac Auchterlonie of Duncan, B.C., were killed by police in a shootout that left six officers injured outside a Bank of Montreal branch in Saanich on June 28.

Police have said the men also had explosive devices in their vehicle.

“There's a bigger issue here, and I find it kind of fascinating, is the infectious nature of some of this stuff,” Gordon said in an interview.

The minds of men who are drawn to firearms and not doing “very well” in life are intriguing, he said, noting the failed application of one of the twins to join the armed forces.

“What gets into the minds of these young men is beyond belief.”

A statement from the Canadian Armed Forces said Mathew Auchterlonie had applied to be part of the military but didn't pass the aptitude test.

Isaac Auchterlonie participated in the Soldier for a Day program in 2018, it said.

“As the name implies, the program lasts one day, and participants are provided a certificate at the end as a keepsake,” it said. "It's not a training activity, but more of a simple “open house”, and often a type of field trip for high school classes.“

Neither man has ever been part of the Canadian Armed Forces in any way, it added.

Three officers remain in hospital, including one who is in intensive care after three surgeries.

A classmate of the twins described the men as “shy and quiet.”

“I was not friends with the Auchterlonie brothers,” she said. “They were very to themselves. I mainly saw them in passing through halls or in classrooms. They were very nice kids.”

Having gone to school with two men now involved in a bank shootout is “very weird and strange,” she said.

“We're all very shocked still. It's a very tight community around here,” Dougan said. “(I'm) just very surprised and just feel awful for the family going through this.”

“Because they get caught up in some bizarre mixture of entertainment and news, and decide to create their own reality.”

Comparisons have been made to the shootout with the North Hollywood Bank of America robbery in 1997 where two robbers were killed in a hail of gunfire.

Gordon said some police departments use footage from that shootout for training purposes to understand what went wrong and what was done right.

The main issue of that robbery was the heavy firepower used by the robbers while the police were not that well-armed, he noted.

“What happened a week ago in Victoria, bears some similarity in that it was a small, suburban bank that was attacked,” he said.

“But the guys who were involved with the North Hollywood bank robbery, were older men, experienced men who had done crimes before and who were carrying a lot of really serious firepower.”

“But I know that the training, the research and the connections to ensure that they are prepared for the most dangerous situations is something that they do.”

The emergency response team was in the area last Tuesday on another matter and changed course to immediately respond to the robbery call at the bank, police have said.

Gordon said he understands that there are a number of questions about what happened last week, and people might look to that old shooting for answers. But these would be questions police and the Independent Investigations Office have on their list as well, he added.

“And foremost is, what kinds of firearms were being used.”

RCMP spokesman Cpl. Alex Berube said investigators have made some initial evaluations about the weapons used by the twins, but further analysis is needed.

“We are not in a position at this time to provide further specifics,” he said in an email.

Police have not been able to establish a motive either, Berube said.

“Every investigation has theories and investigators need to gather information and evidence and ultimately eliminate or confirm those theories or even follow the evidence to other possibilities.”

Gordon said the true motive of the armed bank robbery by the twins may never be known.

“Usually the motive is cash. That's the purpose of a robbery. You're not doing it for any other reason,” he said.

“So, they were probably out to get some quick and easy money. And or do it with a bit of excitement. Usually people who rob banks, there aren't that many of them anymore, do it purely for the cash. It's a question with an obvious answer, in many respects.”

Saanich Police joined by Victoria Police and RCMP respond to shots of gunfire involving multiple people and injuries reported at the Bank of Montreal during an active situation in Saanich, B.C., on Tuesday, June 28, 2022 THE CANADIAN PRESS/Chad Hipolito