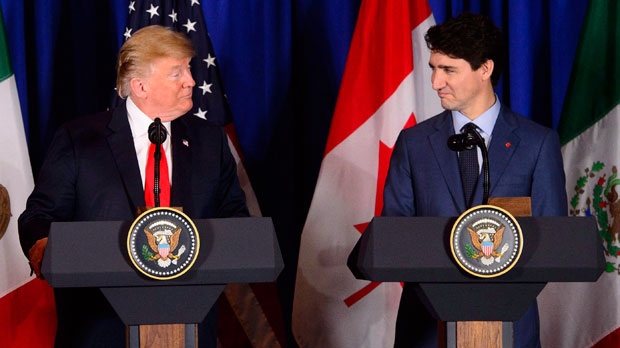 TORONTO -- The White House is calling the detentions of two Canadians in China unlawful and Canadian Prime Minister Justin Trudeau and President Donald Trump have agreed to continue to seek their release, officials said Monday.

China grabbed the Canadians in apparent retaliation for the arrest of a top Chinese tech executive last month. Trudeau spoke to Trump in a phone call Monday.

The White House hasn't spoken publicly about the detained Canadians until now. U.S. Secretary of State Mike Pompeo and a State Department spokesman previously called for their release.

"The Prime Minister thanked the President for the strong statements of support by the United States in response to the arbitrary detention of two Canadians in China.The two leaders agreed to continue to seek their release," Trudeau's office said in a summary of the call.

The arrests came after Meng Wanzhou, the chief financial officer of Chinese telecommunications giant Huawei, was arrested in Canada on Dec. 1 at the request of the United States, which wants her extradited to face charges that she and her company misled banks about the company's business dealings in Iran.

Trudeau and Trump spoke about the U.S. extradition request and "they reaffirmed the importance of respecting judicial independence and the rule of law," Trudeau's office said.

Trump previously said he might intervene in the Huawei case if it would help clinch a trade agreement with China, upending U.S. efforts to separate the court proceeding from U.S.-China trade talks and contradicting Canadian officials who said the arrest was not political.

Canadian Foreign Minister Chrystia Freeland said last month that Canada would embark on a campaign with allies to win the release of the detained Canadians. The U.S., the U.K. and the EU issued statements in support.

A show of support from allies is significant for Canada, which has felt relatively isolated in recent months. In August, Saudi Arabia expelled Canada's ambassador to the kingdom and withdrew its own ambassador after Canada's foreign ministry tweeted support for an arrested Saudi activist.

The Saudis also sold Canadian investments and ordered their citizens studying in Canada to leave. No country, including the U.S., spoke out publicly in support of Canada.