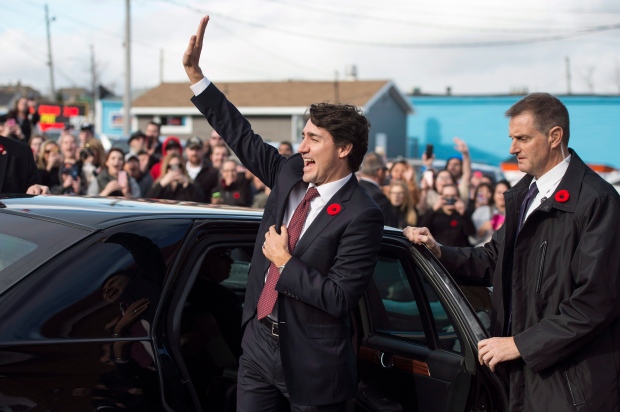 OTTAWA -- The chill of the Cold War will run through Cuba when Prime Minister Justin Trudeau arrives in the country this week.

The warming of relations between Cuba and the United States could end next year when Donald Trump takes over as president, backed by a Republican-controlled Congress that has vowed to renew sanctions and roll back the re-opening of diplomatic relations.

Rather than having a chance to stake out more space for Canadian businesses being muscled out by American companies coming into Cuba, experts say Trudeau is now walking into a Cuba that's newly hesitant about further thaws in the American relationship.

Cuba's military starts five days of exercises hours after Trudeau's arrival in Havana, with the army warning locals they are likely to see the movement of troops, planes and explosions "where this may be required" around the country.

It's the first time in three years that the exercises, started during Ronald Reagan's presidency in the 1980s, will take place. The announcement in the communist-controlled newspaper Granma spoke about the military's need to "respond to different enemy actions," a reference to the United States.

"Trump's election could potentially strengthen the hand of those forces within the Cuban government who weren't that keen on this rapprochement," said Karen Dubinsky, an expert on Canadian-Cuban relations from Queen's University in Kingston, Ont.

"Everybody is slipping back into the Cold War ruts that have existed there for 50 years. That's really a possibility on both sides."

Trudeau's short trip to Cuba is the first stop in a week of travels that will see him make a stop in Argentina before heading to Peru for the APEC leaders' summit.

The visit is likely to give the Cubans some sense of stability, knowing that America's largest trading partner and neighbour wants to maintain normal relations, said John Kirk, a professor in the department of Spanish and Latin American studies at Dalhousie University in Halifax.

The Trudeau name should mean a warm welcome for the prime minister. His father's visit 40 years ago is still remembered fondly by Cubans; former Cuban leader Fidel Castro was an honorary pallbearer at Pierre Trudeau's funeral in 2000.

Canada and Mexico were the only two Western countries to maintain diplomatic ties with Cuba when the United States severed connections to the island nation in 1961. John Diefenbaker's subsequent decision to stay out of the Cuban missile crisis in 1962, and Pierre Trudeau's visit to Cuba in 1976 -- the first NATO leader to visit the country -- cemented Canada's political independence from Washington on the world stage.

Things changed in December 2014 when Obama announced a thawing in the relationship after months of secret meetings with Cuban officials -- meetings that were quietly hosted in Canada.

Carlo Dade, an expert on Latin America with the Canada West Foundation, said Obama's decision to normalize relations with Cuba was a vindication of Canada's foreign policy.

With Trump set to assume the presidency in January, Obama's work is now under threat.

Trump broke with many Republicans last year when he spoke in favour of renewed relations with Cuba, but that he would have negotiated a better deal. As election day neared, however, his position hardened.

Days before the election, he told a Republican rally in the key state of Florida -- home to hundreds of thousands of Cuban Americans -- that he would tear up Obama's agreement with Cuba unless he got a better deal out of Havana. He has said much the same about the North American Free Trade Agreement.

Republicans who backed Trump's position expect him to follow through on rolling back Obama's rapprochement with Cuba, but it's unclear how high it will be on his agenda. Cuba wasn't mentioned in the plan Trump laid out for his first 100 days in office.

"Until we get some definite move out of Trump on Cuba, it's best just to continue as is, but to be prepared for anything," Dade said.

"This isn't diplomacy as normal. We're going to have readjust our thinking, our framework for dealing with him."

Officially, Trudeau will meet with Cuban President Raul Castro, who took over his country's leadership in 2008 from his brother, the leader of Cuba's communist revolution in 1959 and the decades-long antagonist to the United States.

Cuba's ambassador to Canada has said there may also be an opportunity to visit with Fidel Castro too.

The Cuban government hope the visit will highlight potential trade and investment opportunities for Canadian businesses in Cuba, particularly in the biotechnology sector and in Cuba's infrastructure.