Trying to tackle the math bogeyman: anxiety in students, teachers and parents 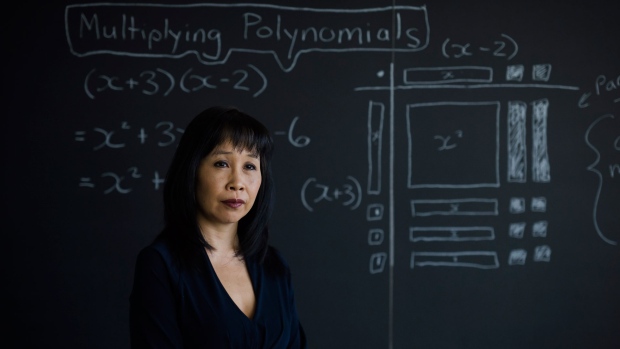 Mary Reid, professor of math education at the University of Toronto's Ontario Institute for Studies in Education, poses for a portrait in Toronto on Friday, December 8, 2017. THE CANADIAN PRESS/Christopher Katsarov

TORONTO - When Ayelet Freedman assigned her Grade 7 students to work on a math problem in groups last year, a 12-year-old girl said she was “too stupid” to work with her classmates.

“She wasn't looking for attention, she was convinced she was stupid,” says Freedman, a math and language teacher in Ontario's York Region.

So she pulled the student aside, assured her she wasn't stupid and asked her to try to work with the other students, many of whom were chatty and confident about math.

“By the end of the year she was more verbal and was participating more and was more confident,” Freedman says.

Confidence in math has become a major problem for girls, research and data show. Experts believe it is one of the reasons women are vastly outnumbered by men in science, technology, engineering and mathematics (known as STEM) professions later in life.

Differences in math confidence between boys and girls show up as young as Grade 3 in Ontario, despite girls and boys scoring similar marks. That trend continues through to high school.

According to the Education Quality and Accountability Office (EQAO) standardized test in the 2016/17 academic year, only 49 per cent of Grade 3 girls in Ontario agreed with the statement they are good at math compared to 62 per cent of boys.

The difference widens in Grade 6, where 46 per cent of girls said they were good at math compared to 61 per cent of boys.

“These attitudes are very important - they are significant predictors of math-related career choices,” says Mary Reid, a professor of math education at the University of Toronto's Ontario Institute for Studies in Education who studies the differences between the sexes.

Some of the reasons are well known: stereotypes that perpetuate the myth that men are better at math and science while women are better at nurturing careers; lack of female role models in a given field; and problems at home, says Reid. But another reason that has gained research attention in recent years is what's known as math anxiety, she says.

A seminal study in 2009 in the Proceedings of the National Academy of Sciences of the United States of America showed American female elementary teachers passed on their anxieties about math to girls in their classes, but not to boys.

Reid's research shows there is a strong correlation between math anxiety and a teacher's knowledge of the subject. According to the most recent EQAO results, 82 per cent of elementary teachers completed post-secondary education in an area unrelated to mathematics.

“If you don't know how to add fractions or the concepts behind them, how do you expect to teach that?” Reid says.

Reid says she spends a lot of time going over mathematics with student teachers in order to address that issue.

In April 2016, Ontario announced a three-year, $60-million math strategy that puts an average of 60 minutes per day of “protected math learning time” in the curriculum for students between Grades 1 and Grade 8.

The following year, only half of students in Grade 6, and 62 per cent of those in Grade 3 met the provincial standard in math. The dismal results prompted Premier Kathleen Wynne to announce the province would look at overhauling its math education program.

In Quebec, students consistently perform the best in the country. Experts believe that is mostly due to stronger teachers who have to go to school for four years for a bachelor of education degree, and more math specialist teachers beginning in Grade 7.

But it's not just an issue for teachers, Reid says. Responsibility lay with every adult who deals with a child's education, she says.

Gina Iuliano Marrello, the superintendent of student success at the Toronto Catholic District School Board, agrees.

At a recent meeting, Marrello said the board asked what they could do to help.

“Try to be positive - all the adults, the trustees, the teachers, the parents - everyone can do it,” Marrello says she told the board.

“We hear people say all the time 'Don't worry, I'm no good at math' - even adults say that and that has to stop. People never say 'Don't worry, I was never good at reading.' People would think that's crazy.”

We notice that when kids come into kindergarten, they don't have that attitude, she says, but they fall into that and by Grade 6 their math ability is pretty low.

For Freedman, a young teacher just starting out, girls' confidence in math is of paramount importance.

“If girls want a job in science or architecture, for example, we have to encourage that confidence in math and find jobs to use those skills,” she says.

“If we don't give them the opportunity to practise the skills or foster their enjoyment in architecture or whatever it may be, they're never going to make that choice if they're not confident in math.”