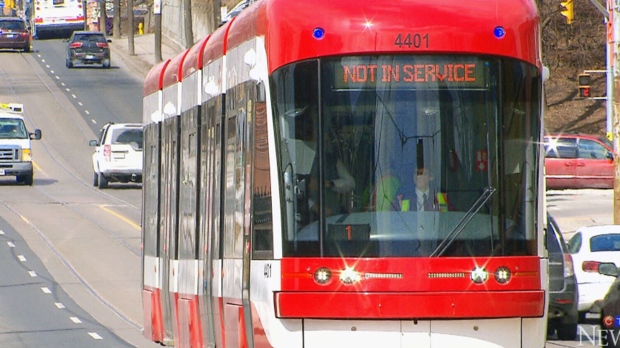 A TTC streetcar is shown in this file photo.

The Toronto Transit Commission Board has given a nod to a plan that will see the city purchase hundreds of new vehicles over the coming years, including at least 13 more streetcars from Bombardier.

In a statement, Mayor John Tory called the plan “a positive step forward” for the future of the TTC.

“Investing in new vehicles and necessary upgrades will make sure our TTC is operating at its best and moving as many people as possible," Tory said. "The plan approved by the board today starts making those investments in key areas.

“Now it is also extremely important that Toronto's investments are in short order matched by the federal and provincial governments who both understand the importance of investing in transit, investing in Canadian-built vehicles, and investing in our post-COVID future."

While the plan approved by the board gets things rolling, the TTC’s full vehicle procurement plan requires billions of dollars from the federal and provincial governments.

The recommendation to purchase 13 more streetcars from Bombardier raised eyebrows when it was made public last week. Toronto’s first order of 204 new streetcars from the company was plagued by a series of delays that went on for years and required the transit commission to rebuild some of its worn-out and decades-old vehicles in order to keep up with service demands.

According to TTC staff, the 13 new streetcars from Bombardier will come at an estimated cost of $140 million and will be delivered between 2023 and 2025. The order is contingent upon the negotiation of an "acceptable agreement” with Bombardier and would include an option for up to 47 additional streetcars.

The fleet strategy approved by the TTC board Thursday also authorizes the purchase of approximately 300 hybrid electric buses. Those buses are to be purchased from up to two contractors at a price of roughly $390 million and will be delivered between 2022 and 2023.

The TTC is currently operating electric buses from three different manufacturers as part of an electric bus pilot program with an eye to having a zero-emissions fleet by 2040. TTC staff are expected to report back to the board next year with the results of a comparison of the three.

"This is a great day," TTC CEO Rick Leary said in a statement. "This plan will see hundreds of new energy-efficient and zero-emission buses carrying TTC customers starting in two years to replace our aging fleet, advance the city's climate change goals and improve the customer experience while promoting economic prosperity and the social vibrancy of the city."

The report said that while the COVID-19 pandemic has hit the TTC hard, there is an "urgent need” to procure new transit vehicles to replace critical assets that are reaching the end of their life so that the TTC can continue to meet customer demand over the next ten years.

The most urgent need is for new vehicles, TTC staff said. The commission will next turn its attention to facilities and technology, such as electric vehicle charging stations and storage facilities.