Toronto police say a TTC bus driver has serious injuries after being stabbed multiple times over a fare dispute on Wednesday, a week after another worker for the transit agency was stabbed.

At around 1 p.m., police said a male TTC employee was involved in a fare dispute with a group of suspects in the area of Keele Street and Gulliver Road.

Police said the dispute started on the bus while it was travelling. The bus driver, police said, then pulled over and the altercation continued outside of the bus before the driver was stabbed with a knife.

“As a result of that interaction, the driver was unfortunately stabbed multiple times, in both his torso and in his shoulder area as well,” Insp. Richard Harris told reporters at the scene.

The man, who is in his 50s, was rushed to a local trauma centre for serious, non-life threatening injuries, police said.

A group of four to five suspects fled south on foot, Harris said.

They are described as Black males in their early teens.

“Information at this time indicates that the individual who committed the stabbing is a young male, approximately 16 to 17 years old, male, Black, with a dark complexion, wearing dark clothing and his hair was in braids,” Harris said.

The area is closed as police investigate. 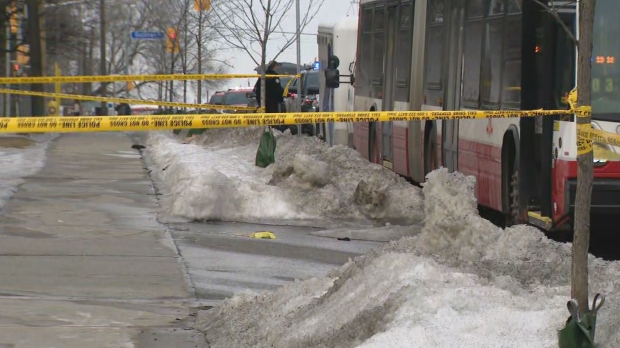 The TTC says the driver has been employed with the transit agency for over 20 years.

“It's a little shocking. We take safety very seriously and the safety of our employees very seriously at the TTC and it's troubling,” TTC Chief Operating Officer Jim Ross said at the scene.

“It's really upsetting, actually, that somebody can just be in the course of operating a bus up and down the street in Toronto and this is the outcome,” Ross added.

In a statement, TTC CEO Rick Leary said that he spent the afternoon at the hospital speaking with the employee and his family, along with ATU Local 113 President Marvin Alfred.

“Safety is the TTC’s top priority. The safety of our employees and the safety of our customers is the most important thing to me,” Leary said in the statement. “We believe that everyone should be able to do their job without fear of violence and we are working closely with Toronto Police Services (Sic) who continue to investigate this incident.”

“We wish our colleague a fast and full recovery. Our thoughts are with him and his family during this time.”

Last Wednesday, another TTC worker was stabbed in the back at Dupont Station.

A suspect in that incident was charged with assault, assault with a weapon and weapons dangerous.

In a separate statement, Alfred said the bus driver is in stable condition. He renewed a call for better protection of transit workers against violence.

“ATU Local 113, which represent nearly 12,000 TTC workers, once again calls on TTC management and the City of Toronto to develop and implement a transit worker protection plan that will stop violent assaults against workers,” Alfred said.

“This should include increased enforcement and penalties for these unacceptable actions. This violence cannot continue, and we need more protection immediately to ensure our safety.”

He said he met earlier this week with Mayor John Tory and that he will meet again in the coming days with the Leary to discuss worker safety.

Alfred noted that assaults against workers have become more common throughout the pandemic, resulting in an “immense” mental and psychological toll on workers.

In a series of tweets, Tory said his meetings with Leary and Alfred have been “very constructive” and called the latest attack on a transit worker “extremely troubling.”

“We rely on TTC workers to keep our transit system running and any attack on our workers is completely unacceptable,” Tory said. “I am committed to working with the TTC and ATU Local 113 to make sure we are doing everything we can to protect operators.”

A TTC employee has serious injuries after a stabbing in the area of Keele Street and Gulliver Road on Wednesday. (Courtesy: Tristan Phillips)