TTC passengers on Line 2 were forced to evacuate their train after a fire broke out inside the tunnel near Dundas West Station this morning.

Toronto Transit Commission spokesperson Stuart Green said crews suspended service between Keele and Ossington stations after a wooden board came into contact with the third rail on the track and caught fire.

He added that the situation was further complicated by a passenger, who “improperly opened a door,” letting smoke into a subway car.

Tyler Patterson was among the TTC passengers who were told to evacuate their train following the fire, which has now been knocked down. 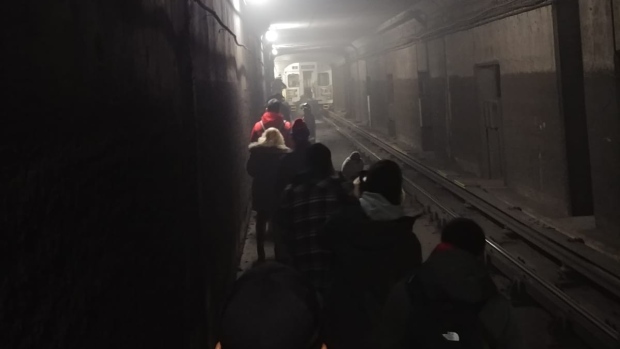 He said his train came to an “abrupt stop” shortly after an announcement was made about an issue with the doors.

"The power kind of went out and next thing you know, they are shepherding everyone into the back two train cars to get away from a bunch of smoke that was starting to pile up in the train," he said.

Patterson said TTC employees then told riders to exit the subway cars and guided them down the dark tunnel to a nearby platform.

"The first people we saw were the train conductors. They came out and they sort of set up the stair to get us down and then we had some tunnel workers and fire department people who were shining some lights to help us find our way through the tunnel," he said.

“I was heading to Humber to hand in some assignments this morning. It turned that wasn’t going to be as easy as I thought."

Daniel Ethier, who was also on board the train, said he got on at Ossington Station and travelled two stops before he saw a big spark.

Ethier told CTV News Toronto that people on board were “screaming” and “panicking.”

He said the car kept filling up with smoke and some passengers experienced trouble breathing, finding whatever they could to cover their faces. 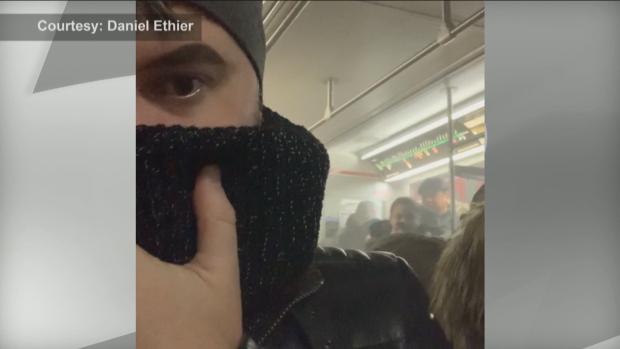 The incident caused commuter chaos in the city's west end, suspending service between Keele and Ossington stations during the morning rush hour. 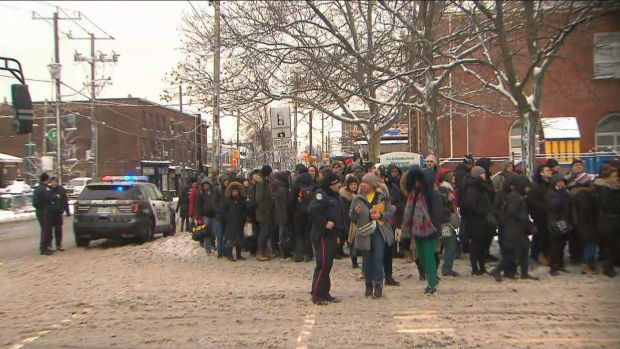 Massive lineups could be seen outside Ossington Station as passengers waited to board shuttle buses.

About 50 shuttle buses were deployed to help transport passengers and at around 9:45 a.m., regular subway service resumed.

In a statement, the union representing TTC workers said the incident is an example of a situation where it would help to have more staff on subway trains and called on the TTC to scrap plans to reduce staff on trains.

“Toronto’s transit workers are thankful nobody was injured in today’s underground emergency,” ATU Local 113 president Carlos Santos said in a statement. “This subway tunnel emergency is an important reminder that having just one worker onboard a subway train - often crammed with hundreds of riders – is unsafe for the public. The TTC must prioritize safety over cost cutting.”

The union is calling on the TTC to restore two-person crews on each train across the subway system.

Wooden cover board contacted third rail causing a fire. Situation complicated when a non-TTC person on board a trapped train improperly opened a door, letting smoke in. GO protocol in effect from Dundas West and Kipling. 50-plus shuttle buses on scene. https://t.co/vqMG2KgC9e