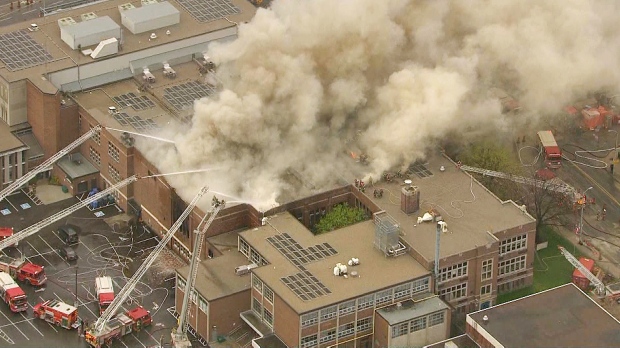 Firefighters battle a five-alarm blaze at a west-end Toronto high school on May 7, 2019.

The TTC says that it has found a solution to some of the overcrowding that displaced students from York Memorial Collegiate have faced in getting to and from their new temporary school in Etobicoke.

The approximately 880 students of York Memorial Collegiate have been relocated to the vacant Scarlett Heights Academy for this year, following a massive six-alarm fire at their school last May.

As a result, many of the students who previously walked to York Memorial Collegiate have been relying on TTC buses to get to and from their temporary school nearly four kilometres away and overcrowding has been reported on the two TTC bus routes, which serve the property.

On Wednesday, TTC spokesperson Stuart Green said that staff have decided to place two additional buses on the 32 Eglinton W route in the morning and in the afternoon when school ends in order to alleviate some of the crowding.

He called the whole ordeal a “unique situation” and a “learning opportunity” for the TTC.

The TTC had previously said that the Toronto District School Board had failed to notify it of the change and that it would be unable to adjust service levels until January due to the lack of advance notice.

On Thursday, TDSB spokesperson Ryan Bird told CP24 that the board didn’t notify the TTC of the change because it is not required to and has not done so in the past for similar situations.