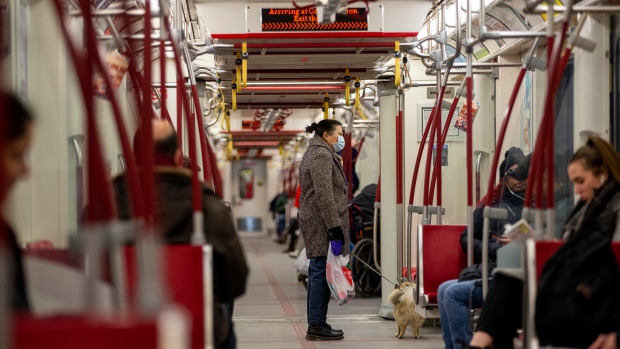 A woman wears a mask while riding the Bloor line subway amid coronavirus fears spreading in Toronto on Saturday, March 14, 2020. THE CANADIAN PRESS/Carlos Osorio

TTC ridership remains a fraction of its pre-pandemic levels and is now even lagging behind the relatively conservative projections that the transit agency had based its budget on in December, according to a new report.

The TTC had hoped that ridership would be at around 34 per cent of pre-pandemic levels by now and would eventually reach 49 per cent in the final quarter of 2021 as widespread vaccinations allowed more riders to return to the system.

But in the report, which will be considered by the TTC board next week, staff reveal that ridership is continuing to languish at around 26 per cent of pre-pandemic levels.

They say that the gap will likely result in a $126 million budget shortfall by the end of 2021, even though the transit agency has received approximately $1.3 billion in funding from the federal and provincial governments to help offset revenue losses resulting from the pandemic.

Staff attribute most of the ridership loss to the stay-at-home orders introduced is both January and April, as well as ongoing public health restrictions.

They predict that once non-essential workers return to the office it will result in a “significant uptick” in subway ridership, which is currently at 19 per cent of pre-pandemic levels.

The concern, however, is that many employers will give their employees more flexibility with respect to their work location post-pandemic and it will result in a long-term drag on the TTC’s bottom line.

“The largest impact to transit demand is that nearly all office workers are working from home, which we estimate accounts for a loss of 26 per cent of pre-COVID-19 demand. This lever will have the biggest impact on demand recovery,” staff say in the report. “There is an expectation that there will be a ‘return to office’ once it is deemed safe to do so. However, based on insights gathered from Statistics Canada’s Canadian Survey of Business Conditions, it is expected that many employers will offer increased flexibility with respect to working from home, which will have some long-term effect on transit demand.”

The report from TTC staff suggests that transit ridership bottomed out at 24 per cent of pre-pandemic levels during the January stay-at-home order. It reached as high as 31 per cent in March as a lifting of public health restrictions allowed retail stores to reopen but took another hit in April as surging case counts and hospitalizations prompted the Ford government to issue another stay-at-home order.

While downtown office workers who are now telecommuting account for a significant portion of the ridership loss, staff say that they also believe that some “customers have reverted to driving, walking or cycling during the pandemic possibly due to concerns about safety,” accounting for about 12 per cent of the ridership decrease.

“It is expected that this pattern will generally hold until COVID-19 restrictions are substantially lifted,” they warn in the report.

The subsidy that the TTC receives per ride is the lowest in North America, meaning that it is more vulnerable to fluctuations in ridership than other transit agencies.