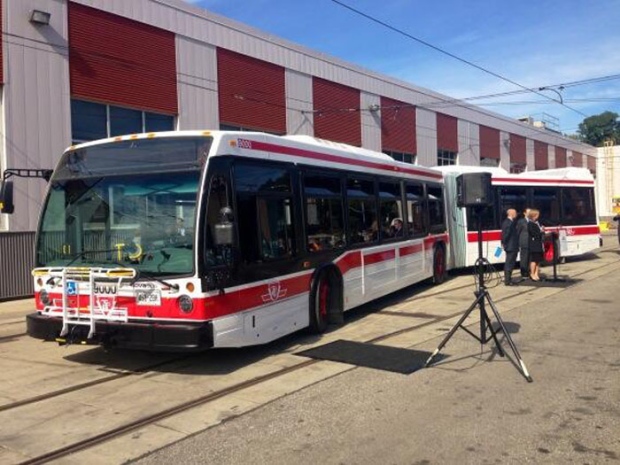 One of the TTC's new articulated buses is displayed Thursday, Oct. 3, 2013. (Natalie Johnson/CTV)

A decade after they were last in service, an articulated or “bendy” bus returned to Toronto’s streets Friday as part of the TTC’s effort to increase capacity on a handful of high demand routes.

The first bus went into service on the 7 Bathurst route but the TTC is planning to operate 153 of the accordion-like transit vehicles on seven routes by January 2015.

The TTC purchased the clean diesel, low-floor buses for $143.7 million.

The TTC is promising more reliable service and it says the new buses will have lower operating costs because they can carry more passengers with fewer vehicles, meaning fewer drivers will be needed once all the buses are in service.

In addition to 7 Bathurst, the three-door buses will operate on the following routes:

The TTC previously used articulated buses from 1987 to 2003.