Toronto’s new streetcars picked up their first passengers this morning as the new vehicles rolled into service.

The new vehicles can hold more passengers and are air-conditioned.

The TTC says the new streetcars feature another major improvement over the old fleet; They are completely accessible, with ramps and designated space inside the vehicles to accommodate wheelchairs and strollers. There is also room for bikes during non-peak hours.

With the rollout, the 510 Spadina route will switch to a proof-of-payment system on both old and new streetcars. That means passengers with proof of payment, including monthly passes or transfers, can board at any door.

The busiest stops along the route will feature street-level machines where passengers can purchase a proof of payment before boarding. Customers will still be able to pay on-board the streetcar.

Presto card terminals are also expected to be rolled out on the new vehicles in November, the province said.

“With these new streetcars we will progressively roll out the honour system across the TTC system,” Byford said.

The TTC plans to hire more fare payment enforcers as the honour system rolls out. The move is expected to speed up boarding time.

The TTC has purchased 204 of the new vehicles. After today, Byford says the TTC will work on switching completely to the new vehicles on the 510 route. The vehicles will then be rolled out on the city’s other streetcar routes.

All of the new vehicles are expected to be in service by 2019. 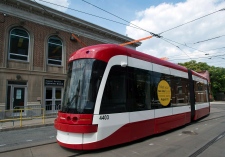 One of the new TTC streetcars is shown in this file photo. A total of 204 new streetcars have been ordered at a cost of $1.19 billion. (CP24)

Some of the city's new streetcars will officially be in service on Sunday morning.