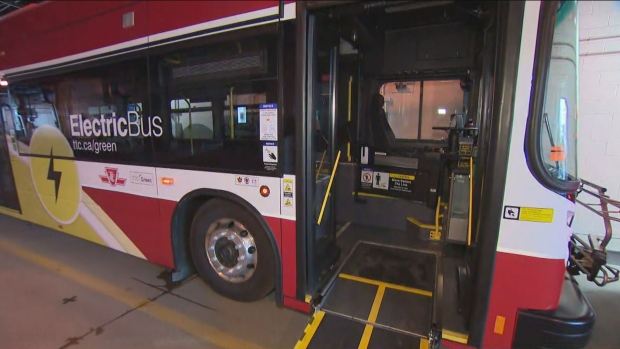 The TTC says that it is now operating the largest fleet of electric buses in North America.

The announcement comes as the transit agency prepares to put its third new electric bus model into service this month.

The TTC board ordered the first 30 buses in November 2017. Then in June 2018, the board approved the purchase of 30 more buses.

When the newest 25 buses go into service by the end of September, the TTC will operate a total of 60 all-electric buses as part of its electric bus pilot program.

The buses were acquired from three separate manufacturers. Two of them make use of the same charging technology while the third requires a different type of charging station.

The newest model is being put into service on the 116 Morningside route starting today.

The TTC says that with three models now in service, it will be comparing them in terms of charging and overall performance in order to determine which models to buy in the future.

"Electrification is the future of public transit and I'm proud that the TTC has been established as an industry leader in this regard, as the owner of North America's largest fleet of eBuses," TTC Chair Jaye Robinson said in a news release. "The TTC Board wholeheartedly supports the TTC's forward-thinking plan to achieve a zero-emissions fleet by 2040."

The buses were purchased at a cost of $140 million, with help from the federal government through the federal Public Transit Infrastructure Fund.

“I want to thank the Government of Canada for providing this funding that helps keep Toronto residents moving by investing in modernizing, expanding and upgrading our transit and transportation infrastructure,” Mayor John Tory said in the release. “This is the right and responsible thing to do for our transit system, our city, and our environment."

Electric vehicles are part of Toronto’s TransformTO climate action strategy, which sets a target of an 80 per cent reduction in local greenhouse gas emissions by 2050. In order to meet that target, the city says, 100 per cent of vehicles in Toronto will have to transition to low-carbon energy by 2050. The electrification of all buses is targeted for 2040.

Federal Infrastructure Minister Catherine McKenna said the investment in Toronto’s electric bus fleet helps meet a federal target of having 5,000 electric buses in Canada's fleets over the next five years and called it “a sign of our commitment to made-in-Canada clean technology.”

Vehicles generate about one-third of the emissions in Toronto today, according to the city. The new electric buses give off zero tailpipe emissions, the city says.