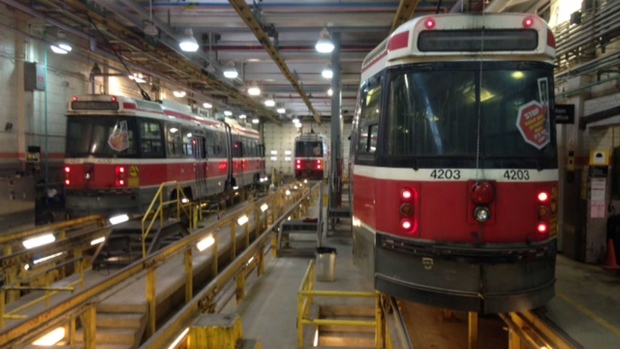 Streetcars in need of repairs are pictured at the Roncesvalles Carhouse Tuesday, December 1, 2015. (Cam Woolley /CP24)

TTC staff are looking for approval to spend millions of dollars to keep the city’s aging streetcars running a little longer as the city continues to wait for much-delayed new vehicles from Bombardier.

According to a staff report being considered by the TTC Board today, it will cost $9.1 million to completely overhaul 30 older streetcars and $25 million to maintain the rest of the tired fleet.

The report comes a week after TTC spokesperson Brad Ross announced that four new vehicles a month are expected to start arriving in April from Bombardier.

Ordered at a cost of $1.25 billion, 73 of the new vehicles were supposed to be in operation by the end of last year. At the moment, only 16 of the vehicles are operating on city streets.

Ross said last week that the delay means the TTC has to essentially “rebuild” old streetcars that were never meant to operate this long.

Caught between the aging streetcars and the delayed delivery of the new ones, the TTC would have to reduce service levels if they don’t spend the extra money, the report says.

The TTC has filed a claim for $51 million in liquidated damages for the delayed delivery of the new streetcars. In the report, TTC staff say they expect the $34.1 million will eventually be recouped as part of that claim.

However it’s not yet clear when the TTC will see the money or whether they will receive the full amount of the claim.

According to the new timeline for their delivery, all 204 of the new streetcars are expected to be in operation by the end of 2019.