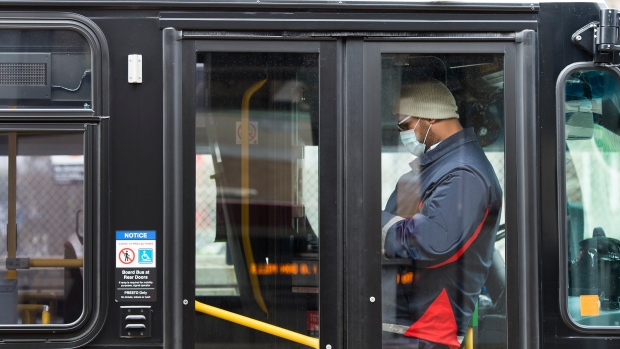 A TTC worker wears a mask in a bus while on shift in Toronto on Thursday, April 23, 2020. THE CANADIAN PRESS/Nathan Denette

The TTC set a new pandemic record for overall ridership last month as customers returned to the system in droves following the lifting of many public health restrictions.

A new report that will go before the TTC board today reveals that there were a total of 1.69 million rides taken on the TTC during the week ending April 1.

That is the highest number of boardings in any single week since March 2020, however it still only represents about 53 per cent of the pre-pandemic norm.

“With the sixth wave of the pandemic and the winding down of postsecondary classes, ridership growth flattened temporarily in April. However, commuter return-to-office is increasing, with downtown office occupancy expected to reach 30 per cent by the end of May. This, coupled with special events returning to the city, should boost transit demand as the summer approaches,” TTC CEO Rick Leary said in the report.

At the height of the first wave of the pandemic in the spring of 2020, TTC ridership plunged to between 15 and 20 per cent of the pre-pandemic norm as businesses were shut down and many employers implemented work from home policies.

Since then ridership has been gradually increasing, though it did briefly drop in January following the detection of the Omicron variant.

The report going before the board today reveals that ridership has now increased by 25 per cent since February. It also points out the fare revenue in the most recent five-week period was actually 50.9 per cent above the estimate contained in the TTC’s revised budget, passed this winter.

“The 2022 Board-approved revenue budget was revised through the city’s 2022 budget process to account for the Omicron impact, decreasing the 2022 passenger revenue by $104.9 million, from $845.9 million to $741 million,” the report stated. “In actual experience, the Omicron impact on revenue was limited to January, with February and March recovering to ridership revenue levels comparable with late Q4 2021 experience, given the effects of the Omicron variant were not as widespread as originally considered.”

The TTC says that ridership continues to vary depending on the mode of travel.

Subway ridership is still only at 45 per cent of the pre-pandemic norm but is up 30 per cent since the beginning of February as many office workers return to the core.

Bus ridership is now at 61 per cent of the pre-pandemic norm but has only increased 19 per cent since February.